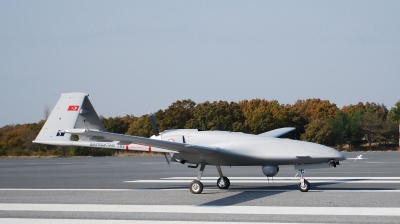 Armenia says it found the Canadian components on a Turkish Bayraktar TB2 armed drone that its forces shot down.
By bne IntelIiNews October 21, 2020

Armenian Prime Minister Nikol Pashinian on October 20 referred to his defence officials stating that they had found Canadian components on a downed Turkish drone as he urged the international community to follow Canada's example by suspending military technology exports to Turkey.

Armenian defence officials the previous day exhibited what they claimed were parts of a Turkish combat drone and its Canadian-made optical and target acquisition systems. The Armenian Ministry of Defence said the Turkish Bayraktar TB2 drone was brought down by Armenian air defence units during fighting against Azerbaijani armed forces in Nagorno-Karabakh. It claimed the surveillance and attack drone was equipped with a state-of-the-art camera and target acquisition system produced by L3Harris WESCAM in Burlington, Ontario.

The WESCAM CMX-15D system was manufactured in June of this year and installed on the downed Bayraktar TB2 in September, Shushan Stepanyan, spokesperson for the Armenian Defence Ministry, said.

Data on the device—which enables drone operators to designate ground targets and guide missiles and bombs to them—showed that it had operated for a total of 31 hours, Stepanyan added.

Armenia has repeatedly accused Turkey of supplying Azerbaijan with arms, including drones and F-16 fighter jets, as well as military advisers and jihadist mercenaries brought in from northern Syria. Ankara in turn has repeatedly denied providing any such backing, but has said that it stands ready to do so should Baku request the move.

Armenian officials have also claimed Azerbaijan uses the Turkish drones to not only target military forces but to conduct indiscriminate bombing of civilian residential areas and infrastructure across Nagorno-Karabakh and Armenia proper. Turkey and Azerbaijan have denied these reports. They have accused Armenia of indiscriminately shelling civilian areas near the Line of Contact and in the localities including the country's second largest city of Ganja. Yerevan denies it conducted such shelling.

Radio Canada International reported officials at Global Affairs Canada as saying they are investigating allegations regarding possible use of the Canadian technology in the Nagorno-Karabakh conflict and "will continue to assess the situation." While the investigation is ongoing, there will be no resumption of exports, officials said.

In an interview with CBC News Network's Power & Politics on October 6, Turkey's Ambassador to Canada Kerim Uras would neither confirm nor deny the presence of Turkish drones in Azerbaijan.

"I would make the case that drones, by pinpoint targeting the aggressor, are actually upholding human rights," Uras said, adding that Canada's decision to suspend exports to Turkey was "unjustified."

"We think it's surprising ... it's hasty, it's not in line with an allied spirit and it amounts to rewarding the aggressor," he said.

Russian Foreign Minister Sergey Lavrov, meanwhile, has said Moscow was in talks with Armenia and Azerbaijan on a mechanism to monitor a ceasefire. Such truces have already failed twice to halt fighting over the territory of Nagorno-Karabakh.

“I hope that we will reach an agreement on such a mechanism in the nearest future,” Lavrov told a news conference in Moscow on October 19. “We need also to substantially speed up efforts for a political resolution.”

The worst violence in decades over Nagorno-Karabakh is in its fourth week with no sign of easing, amid reports of intense fighting close to Azerbaijan’s border with Iran. Russia has offered to deploy military observers to oversee a cessation of hostilities and negotiations were continuing, Lavrov said.

Hundreds and possibly thousands of soldiers and civilians have been killed since the conflict erupted on September 27.

Armenians took control of Nagorno-Karabakh and seven surrounding districts of Azerbaijan in a 1990s war amid the collapse of the Soviet Union.

Azerbaijan says it’s fighting to recover what is internationally-recognised as still its territory. Armenia says it’s defending Nagorno-Karabakh’s right to self-determination as an enclave dominated by ethnic Armenians.