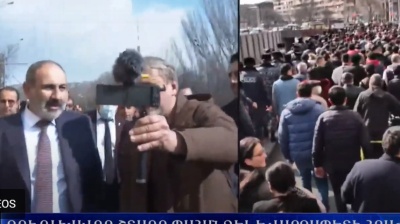 Split screen local TV news coverage shows Pashinian (left) on the streets of Yerevan talking to a reporter, while (right) his supporters gather in the capital in response to his call. / RFE/RL Armenian service, screengrab.
By bne IntelIiNews February 25, 2021

Armenian Prime Minister Nikol Pashinian on February 25 took to the streets of Yerevan, along with hundreds of his supporters, after he denounced "an attempted military coup" that he said was under way. His move came after an open letter demanding his resignation was published by the head of the General Staff of the Armed Forces and other army officers.

The Kremlin said it was alarmed by the rapidly changing events and urged all parties to refrain from the use of force. Russia has around 2,000 peacekeeping troops on the ground in and around Nagorno-Karabakh, attempting to keep the peace since Armenia last November lost a six-week war with Azerbaijan over the enclave. As part of the Moscow-brokered ceasefire, Pashinian signed away lost territory to Azerbaijan, angering many Armenians who claimed he had mishandled the war. Pashinian said the choice was to either sign for the truce, or see the whole of Nagorno-Karabakh fall into Azerbaijan’s hands.

Pashinian called the letter from the army chiefs "an attempted military coup" and announced the dismissal of Onik Gasparian, the head of the General Staff of the Armed Forces.

"I'll speak in Republic Square at 4 pm Gather in the square by this time," Pashinian, who came to power after huge displays of peaceful ‘people power’ in the spring 2018 Armenian velvet revolution, wrote on his Facebook account.

The question now is just how polarised are the Armenian people? Do enough Armenians want Pashinian to stay to give him the weight to stay in office, especially given he faces opposition from the president and Armenian Apostolic Church, as well as numerous opposition parties? Also unclear as events unfolded was whether the armed forces are willing to use force to ensure the removal of Pashinian.

In its letter, the General Staff demanded the resignations of Pashinian and his government, saying the call came in "resolute protest" against the dismissal of the first deputy chief of the General Staff "for short-sighted reasons". Earlier this week, Pashinian dismissed Tiran Khacharyan, the first deputy, for ridiculing his claims that Russian-supplied Iskander missiles used in the Nagorno-Karabakh conflict mostly failed to explode on contact.

"The prime minister of the Republic of Armenia, the government, will no longer be able to make adequate decisions in this critical situation for the Armenian people," the statement from the army chiefs added.

The statement accused Pashinian's government of making "serious mistakes in foreign policy" that resulted in the Armenian state being on the verge of destruction.

"The army has always been with the people, just like the people are with the army," the statement added.

"We are watching the development of the situation in Armenia with concern," Kremlin spokesman Dmitry Peskov told journalists in Moscow. "Naturally, we call for calm."

Russia has a military base in Armenia under a defence pact. Azerbaijan was armed by, and given bellicose backing by, Turkey in the war over the enclave, which led to the loss of more than 6,000 lives.

Pashinian has faced a series of protests involving thousands on the streets of Yerevan demanding his resignation, but some critics said that the protesters were acting on political lines and that there was still plenty of popular sentiment that Pashinian was still the best available person available to face Armenia’s immediate challenges.

Pashinian has lately raised the possibility of holding an early parliamentary election.