As first Friday prayer is held at Hagia Sophia since 1930s observers ask: “Is secularism dead in Turkey?” 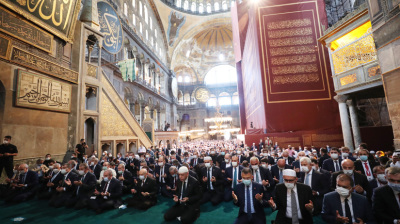 Who dare speak for Turkish modern secularism in Recep Tayyip Erdogan’s increasingly authoritarian and Islamist state? The question was never more cutting than on July 24 as the president joined worshippers for the first Friday prayer at Istanbul’s iconic Hagia Sophia—turned back into a mosque to much dismay and outcry in Christendom after a court lately annulled the former Byzantine cathedral’s 86-year-long status as a museum—since the 1930s. 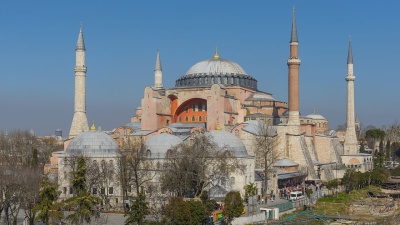 Bells tolled in mourning in Greece as the Hagia Sophia, of immense importance to both Muslim and Christian history and heritage, held its first Friday prayer in 86 years following its re-conversion into a mosque. (Picture credit: Arild Vargin)

It was of course Mustafa Kemal Ataturk, founding father of the Republic of Turkey and the first leader of the Turkish Republican People’s Party (CHP), who in 1934 decided that the huge sixth-century domed building overlooking the Golden Horn harbour on the Bosporus—for centuries at the heart of the Muslim Ottoman empire and known to Turks as Ayasofya and Christians as Santa Sophia—should be turned into a museum in a symbolic, secular break with the past. But the leaders of today’s CHP, perhaps wary of the ire of the autocratic Erdogan and his Islamist-rooted Justice and Development Party (AKP), have this week seemed loathe to broach the issue of defending secularism.

Rather than entering into that potentially incendiary debate, the CHP, which runs Istanbul having defeated Erdogan’s candidate for mayor last year, accused the populist president of making a calculated political move, rather than a religious one.

The most impassioned opposition to the conversion of the Hagia Sophia—built by the Byzantine Emperor Justinian in AD537 as a cathedral but turned into a mosque by Sultan Mehmet II in AD1,453 after the Ottoman conquest of Constantinople—was seen in Greece, home to millions of Orthodox Christians who consider the former Byzantine place of worship central to their religion. While thousands of pious Muslims from across Turkey arrived in Istanbul even to be present outside the Hagia Sophia as the historic Friday prayer took place, church bells tolled across Greece in mourning.

In a message marking Greece’s 46th anniversary of the restoration of democracy which also fell on July 24, Greek Prime Minister Kyriakos Mitsotakis described Turkey as a “troublemaker” and the Hagia Sophia conversion an “affront to civilisation of the 21st century”. Using the old name of Istanbul referred to by Greeks, he added: “What is unfolding in Constantinople today is not a demonstration of strength, but proof of weakness.” 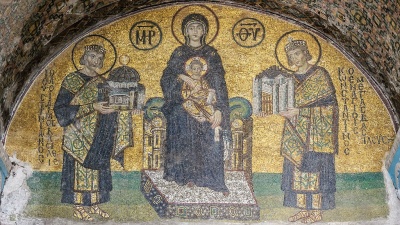 The Hagia Sophia contains several important mosaics of the Virgin Mary and Jesus Christ, such as this one at the southwestern entrance. (Picture credit: Myrabella)

When Erdogan announced his decision to restore Hagia Sophia as a mosque on July 10, Pope Francis responded by saying that his "thoughts go to Istanbul", adding: "I think of Santa Sophia and I am very pained." Head of the Eastern Orthodox Church, Patriarch Bartholomew I, cautioned that the conversion of the building would "disappoint millions of Christians" and fracture two worlds. But away from the religious side of the controversy, it is the political “Why now?” question that is most intriguing.

Erdogan himself stressed that Turkey had exercised its sovereign right, saying: “After 86 years, Hagia Sophia will serve as a mosque again, in the way Fatih the conqueror of Istanbul had indicated in his deed.” But, writing for openDemocracy, Murat Belge, editor of Iletisim Publishing House and Yeni Gundem and head of the department of comparative literature at Istanbul Bilgi University, referred to “Turkey’s presidential dictatorship” and to the Hagia Sophia conversion as taking “a major step towards the President’s ideal goal of an Islamised one-party state”.

Looking at what might have prompted Erdogan to so suddenly take the radical Hagia Sophia step, given his hesitancy in the past, Belge contended: “In Turkey one usual answer to such questions is that Erdogan is having a hard time on the economic level, which is eating away his electoral support, and so he is trying to change the agenda. That the economy is in difficulties is correct. He and the AKP, the party which he heads, are not gaining in popularity at the moment. Even though the earliest elections are not due until 2023, which means there is a lot of time, it is highly doubtful that things will be put right by then. So economic problems may be forcing Erdogan to look to new initiatives, whether military and international in Syria and Libya or ideological as with Ayasofya.

“Basing their argument on his economic failures, the opposition often claims that Erdogan ‘invents’ such issues to ‘divert’ attention from the real problems for which he doesn’t have answers or any good news. There may be some truth in this interpretation but overall the ‘diversion’ explanation is not convincing. The Ayasofya conversion brings Turkey closer to the kind of society Erdogan is trying to engineer. In this respect it is no ‘diversion’; rather it takes a major symbolic step towards his ideal goal of an Islamised one-party state.”

Another interpretation of events is that for Erdogan retaining assertive power is simply the all-consuming goal—whether that is achievable with democracy or not might not be the first consideration.

Erdogan, according to Belge, once said that democracy is like a bus which you can leave at the most convenient point. “His regime has no internalized respect for democracy, which is regarded as a ‘Western’ invention,” added the editor and academic.

In Al-Monitor, columnist Pinar Tremblay, a visiting scholar of political science at California State Polytechnic University, and contributor to Turkish news outlet T24, responded to the jarring Hagia Sophia controversy by asking: “Is this the end of Turkish secularism?”

She noted: “Recent polls indicate only 20% of Good Party [Iyi Party] voters and 21.8% of left-leaning Republican People’s Party (CHP) voters approve of the decision, along with 33% of the voter base of the pro-Kurdish People’s Democratic Party’s (HDP). The HDP’s elected officials are the only ones who dared speak words of caution as the ruling Justice and Development Party (AKP) promotes a monolithic expression of identity.”

Tremblay quoted author Orhan Pamuk, a Nobel laureate, as saying: “There are millions of secular Turks like me who are crying against this but their voices are not heard.”

One academic who spoke to the columnist referred to secularism in Turkey as having “gone underground”, while law professor emeritus Levent Koker was cited as saying: “Over time the AKP became entrenched as the political instrument of the Turkish nationalist establishment, now politically using religion more efficiently and visibly, turning the Diyanet [Turkey’s religious affairs directorate] into an overt instrument of political hegemony. This does not mean that the AKP, as an Islamist party, is changing the foundational characteristics of the Turkish Republic to turn it into an Islamic polity. To the contrary, what seems to be happening now is the rise of authoritarian rule with a strong reference to religion in a historical-political context in which Islam has been institutionalized as a mechanism of state control over society. It is an open-ended question whether this authoritarian formation could be reversed or will advance to turn Turkey into a Sharia-based state. The historical background says the latter option is very remote, while the former is possible but very difficult under the current national and international climate dominated by nationalist/populist authoritarians.”