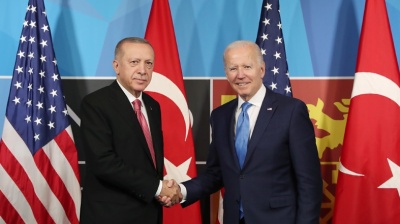 Analysts are asking what have Erdogan and Biden shaken on exactly. / Turkish Presidency.
By bne IntelIiNews June 30, 2022

Turkey’s hopes that developments at this week’s Nato Madrid summit moved it closer to obtaining F-16 warplanes from the US were on June 20 tempered by an announcement that regional arch-rival Greece has sent an official request to Washington for the acquisition of 20 of the world’s most advanced fighter plane, the Lockheed Martin F-35 stealth jet.

Ankara remains unable to get its hands on the scores of F-35s it has ordered. It remains locked out of the F-35 development programme, with US and Nato officials saying they are concerned that S-400 advanced missile defence systems bought from the Kremlin by Turkey could pose a security threat to F-35 performance data.

A row over Turkey being left without F-35s despite the likelihood of neighbour and fellow Nato member Greece receiving F-35s in the not-too-distant future is likely to blow up further down the road, but for now Turkish President Recep Tayyip Erdogan is pushing hard for the F-16s.

When Turkey at the Madrid summit withdrew its opposition to Finland and Sweden joining Nato, many commentators drew the conclusion that Erdogan – denied major arms from the US in recent years due to an unofficial bipartisan boycott mounted by Congress over the S-400s, Turkish military activities in Syria and human rights abuses in Turkey, among other matters – sensed a deal for the F-16s must be at least within reach.

Publicly, Erdogan said support for the Nordic countries’ Nato applications would be given because in a “diplomatic victory” for Turkey they had agreed to measures to crack down on terrorists and militants in their societies that Ankara says are a threat to Turks.

Reuters, meanwhile, reported that US President Joe Biden in Madrid rejected suggestions that the F-16s would be allowed to Turkey in return for Ankara dropping objections to Finland and Sweden joining Nato, telling the media: “What I said was, [just as] I said back in December, as you’ll recall, we should sell them the F-16 jets and modernise those [older F-16] jets [they have] as well. It’s not in our interest not to do that.

“And there was no quid pro quo with that. It was just that we should sell, but I need congressional approval to be able to do that. And I think we can get that.”

For his part, Erdogan kept up the pressure in relation to the Kurdish and Gulenist militants and terrorists he claims operate from Finland and Sweden. If Helsinki and Stockholm fulfilled their pledges to Turkey on cracking down on these individuals, including with extraditions where appropriate, Turkey’s parliament would ratify their Nato memberships, he said, remarking: “If they fulfil their duties, we will send it [the request for ratification] to the parliament. If they are not fulfilled, it is out of the question.” Despite his words, analysts will of course keep reading “F-16” between the lines.

So perhaps the membership deal should not be described as done at all. Erdogan, as is his wont, is keeping everyone off-balance. But the consensus of analysts is surely that a breakdown of the deal is far more likely to stem from the F-16 issue than it is from the issue of the militants and terrorists (not to mention Erdogan’s tendency to work matters to Moscow’s favour when it suits him). And for “terrorists” we should probably say “so-called terrorists”. As Finland has pointed out this week, Turkey has a broad definition of what makes a person a terrorist.

Russia resumes oil supplies to Slovakia and Hungary but imports to Czechia remain halted
Poll shows every other Russian supports continuing the war against Ukraine
Ukraine will receive $5.5bn in support from the US later this month

Government claims three quarters of foreign companies in Russia are still working
7 hours ago
Moldova says it won't be able to make next payment to Gazprom
7 hours ago
Russia resumes oil supplies to Slovakia and Hungary but imports to Czechia remain halted
7 hours ago
US charges Iran operative with plotting to kill former Trump hawk John Bolton
16 hours ago
Ukraine will receive $5.5bn in support from the US later this month
1 day ago