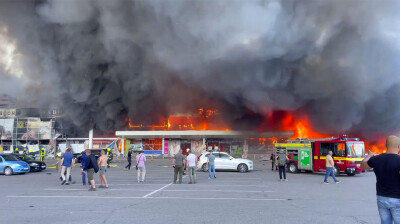 At least 10 were killed after Russian rained down missiles on the Kremenchuk shopping mall packed with weekend shoppers. / t.me/V_Zelenskiy_official
By bne IntelliNews June 28, 2022

At least a dozen people were killed and more than three dozen injured after Russian missiles slammed into a packed supermarket in the middle of the day in Ukraine's industrial city of Kremenchuk on June 27.

Ukrainian President Volodymyr Zelenskiy tweeted that there were more than 1,000 people shopping in the mall when Russian missiles struck the building, setting it on fire and causing the roof to collapse on customers still trapped inside.

Emergency services were quickly on the scene to attempt to pull survivors from the rubble. As bne IntelliNews went to press the authorities reported 13 people had been killed, but the death toll is expected to rise higher.

“The occupiers fired rockets at the mall, where there were more than a thousand civilians. The mall is on fire, rescuers are fighting the fire, the number of victims is impossible to imagine,” Zelenskiy said on his twitter account. “No danger to the Russian army. No strategic value. Only the attempt of people to live a normal life, which so angers the occupiers. Russia continues to place its powerlessness on ordinary citizens. It is useless to hope for adequacy and humanity on her part.” The attack comes as the G7 leaders meet in Bavaria, Germany to discuss their collective response to Russian President Vladimir Putin’s decision to invade Ukraine at the end of February. Many ideas are on the table, but the US and others have been advocating for sanctions on Russia’s gold trade and for price caps to be introduced on its oil business.

Just as the G7 leaders arrived in Germany, Russia escalated its rocket attacks against the whole country, including rocket attacks on residential buildings in Kyiv, where life had been slowly returning to normal. Russian troops launched a massive missile strike on Sunday of more than 50 missiles of various types, the Ukrainian Armed Forces said in a statement.

The latest attack is believed to also be a message to the assembled leaders in Bavaria, warning them that Russia will not back down.

"The occupiers fired missiles at a shopping centre where there were over a thousand civilians. The mall is on fire, rescuers are fighting the fire. The number of victims is impossible to imagine," Zelensky wrote on Telegram, adding that Russia is the "largest terrorist organisation in the world." Following the Bucha massacre, Russia has been accused of war crimes, but more recently the calls to declare Russia a sponsor of terrorism have been growing louder. Ukraine has called for an emergency meeting of the UN Security Council over the strike.

The Ukrainian defence ministry said the strike was deliberately timed to coincide with the mall's busiest hours and cause the maximum number of victims.

The Ukrainian air force said the mall was hit by Kh-22 anti-ship missiles fired from Tu-22 bombers from the region of Kursk in western Russia.

"The missile fire on Kremenchuk struck a very busy area which had no link to the hostilities," the city's mayor Vitali Maletsky wrote on Facebook.

The attack caused an uproar on social media where the Kremlin was accused of war crimes and attacks that are deliberately targeting innocent civilians.

Zelenskiy attended the first day of G7 talks in Bavaria by video link and gave the assembled leaders a two-hour briefing on the situation.

He said that he wants the war over by Christmas, but warned that Russia could use any pause in the fighting to regroup and then launched a fresh campaign in the winter to take more territory.

A top adviser to President Joe Biden told CNN that Zelenskiy was focused on regaining momentum in Ukraine over the coming months – and not years – when he spoke to leaders.

"Zelenskiy was very much focused on trying to ensure that Ukraine is in as advantageous a position on the battlefield as possible in the next months as opposed to the next years, because he believes that a grinding conflict is not in the interest of the Ukrainian people," US national security adviser Jake Sullivan said after the meeting.

In a joint statement after their meeting with Zelenskiy, the leaders pledged to continue supporting Ukraine "for as long as it takes". Ukrainian Foreign Minister Dmytro Kuleba also repeated calls on Kyiv's allies to supply more heavy weapons and impose fresh sanctions on Russia.

"Russia is a disgrace to humanity and it must face consequences," he wrote on Twitter.

Analysts have warned that Russia could retaliate to the West’s supply of more heavyweight weapons to Ukraine, such as the US-made High Mobility Artillery Rocket System (HIMARS) that arrived in Ukraine last week.

Military officials in Kyiv say the system has already been put to use by Ukrainian forces.