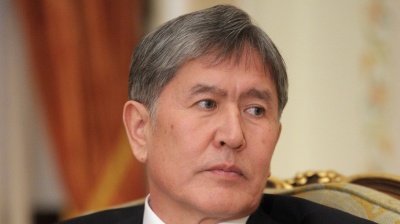 By resisting arrest in the way he did Atambayev has "gravely trampled upon the constitution and laws of Kyrgyzstan" according to his successor as president. / premier.gov.ru
By bne IntelliNews August 9, 2019

Kyrgyz security and law enforcement forces regrouped following their botched first attempt at arresting ex-president Almazbek Atambayev and raided his compound in Koi-Tash village outside of Bishkek for a second time on August 8, using an armoured vehicle to break through the gates.

This time Atambayev walked out of his residence and turned himself in. He was flown by helicopter to the capital to avoid supporters blocking roads and, according to his lawyer Sergey Slesarev as quoted by 24.kg news agency, was immediately charged with corruption.

The first raid on August 7 left one commando dead and 80 people injured, including supporters of Atambayev who barricaded the residence and shielded the ex-president. That operation was so poorly executed that the Kyrgyz national security chairman offered his resignation, though the resignation was refused. Following Atambayev’s detention yesterday, hundreds of his supporters rallied in front of the parliament building in Bishkek. Security forces broke up the crowd using tear gas and stun grenades. Around 40 people were arrested.

Atambayev, 62, is currently being held at the State National Security Service (GKNB) building—he will be held there in pre-trial detention until August 26.

The Interior Ministry has charged Atambayev over the “illegal early release” from prison in 2013 of one of Kyrgyzstan’s most notorious crime bosses, Aziz Batukayev, an ethnic Chechen, who was sentenced in 2006 to an imprisonment of nearly 17 years. Batukayev, who was released after being diagnosed with leukaemia, was charged with the murder of a Kyrgyz lawmaker and an interior ministry official, among other crimes. His diagnosis was later allegedly found to have been falsified.

Attambayev’s arrest coincided with the arrival in Bishkek of Russian Prime Minister Dmitry Medvedev for an Eurasian Economic Union (EEU) meeting. Medvedev said he hoped the conflict would not lead to "political and, therefore, economic instability in the country" and said he would discuss the situation with Kyrgyz leaders.

"By putting up fierce armed resistance to the investigative measures undertaken within the framework of the law, Almazbek Atambayev gravely trampled upon the constitution and laws of Kyrgyzstan," President Sooronbai Jeenbekov told parliament during a crisis meeting.

"If before yesterday [August 7] Atambayev was summoned to the investigation as a witness, now he will be treated as someone accused of committing a serious crime," he said.

Prior to the second raid, the former president said: “Yesterday, they did not say they came to take me for questioning, they came like gangsters and started shooting at the people. For one or two months I have been saying that I will use arms to protect myself if somebody dares to trespass my home. I have a pistol that I received as a gift and a rifle.”

Video taken inside the villa, obtained by RFE/RL, showed the signs of a pitched battle. Sandbags and iron gates in doorways stood in stark contrast to the opulent grand rooms decorated with works of art where six police officers were held hostage by Atambayev supporters through the night before being released around noon on August 8. Some rooms held caches of automatic weapons and magazines of bullets. Others were visibly damaged by the battle.

Meanwhile, inside the main residence, a relaxed Atambayev, dressed in jeans and a plaid shirt, negotiated his arrest.
"I am not worried about myself, you can even shoot me now here if you will, just do not touch my guys [supporters],” Atambaev shouts to Deputy Interior Minister Kursan Asanov, who is on a different floor of the house. “We will not. I give you my word,” Asanov responds.

Atambayev and successor Jeenbekov have remained locked in a bitter row almost since the latter took office in late 2017. Before he became president, Jeenbekov was seen by many observers as likely to become nothing more than a puppet of Atambayev, who was the central figure in Kyrgyzstan’s two revolutions, which toppled the governments of Askar Akayev in 2005 and Kurmanbek Bakiyev in 2010. Instead the two became embroiled in a power struggle over influence in Kyrgyz politics and the Social Democratic Party, which controls the majority coalition in parliament. Atambayev saw his popularity wane during his presidency, thus there is no clear prospect of present events sparking a third revolution.

Russia throws in lot with Jeenbekov
Overall, despite the two previous revolutions, all Kyrgyz leaders have remained loyal to the country’s Soviet-era master, Russia, which has a military airbase in the country. Given that Russia appears to have thrown in its lot with Jeenbekov and remains disinterested in any potential instability in the country, no outside interference is likely to prevent Jeenbekov following through with the incarceration of Atambayev.

Medvedev even told journalists yesterday that “in the 21st century, Kyrgyzstan has used up its limit of revolutions”.

The hundreds of protestors seen in Bishkek are likely the last of the weakened bastion of Atambayev allies. Any potential allies of Atambayev that were still part of the power structure have been dismissed from their positions in the past year and a half, with Jeenbekov cracking down on them under the pretence of an “anti-corruption campaign”.
Under Kyrgyz law, presidents remain in office for six years for a single term and cannot seek re-election. As such, Jeenbekov does not have to worry about the violent incident’s impact on his future in office.

However, this feud with Atambayev, who was stripped of his ex-presidential immunity after the simple introduction of a new law, does not bode well for Kyrgyzstan’s already toxic political environment. If Atambayev can be taken down so ruthlessly like this, so can Jeenbekov or any other ex-president. That reality might tempt future Kyrgyz leaders to hold on to power, jeopardising the Central Asian nation’s struggle to install a functioning democratic government.