Attempts under way to send Turkey “cap in hand” to IMF: Erdogan 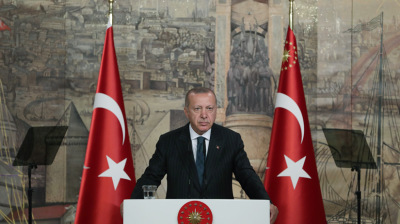 If you find it hard to imagine Turkish President Recep Tayyip Erdogan being dragged kicking and screaming into a new International Monetary Fund (IMF) loan programme, then you’d be darn right there. Read on.

Turkish media have reported that late on June 18, Erdogan said at a dinner in Istanbul that there were indeed attempts under way to force Turkey into such a bailout in order to make the country subservient.

“They want to see a Turkey like before, a Turkey that went cap in hand to the IMF,” Erdogan reportedly said.

Some observers of Turkey’s present challenging economic predicament say Ankara should apply for a new loan accord with the IMF to help its economy deal with a fast-expanding pile of foreign currency-denominated corporate debt and to provide state budget relief.

Erdogan, on the other hand, was cited as saying such calls were actually motivated by discomfort over Turkey’s economic and political successes. Enemies had for several years attempted to blacken Turkey’s name, he claimed, in his trademark rhetorical fashion.

“This is the motivation for increasing doses of threatening language towards our country, for the international media smear campaigns,” he protested.

Erdogan has blamed the currency crisis that threw Turkey’s economy off the rails last summer on foreign enemies manipulating the financial markets. Not for him any consideration that his administration may have thoroughly botched the economy by over-fuelling it with debt while the good times rolled, with nary an eye on the longer term consequences.

Last week, a Turkish prosecutor even opened a case against 38 people, including two Bloomberg reporters, other journalists and economists, accusing them of seeking to destabilise the economy. The case hinges on an article written by the Bloomberg journalists, which said banks were having trouble meeting foreign currency demand while the lira nosedived to a record low last August.

In May, the IMF called on Turkey to ensure economic and financial stability, pressing for a comprehensive package of reforms. But it went out of its way not to tread on Erdogan’s toes by stressing twice over to reporters that no Turkish officials had been in touch with a mind to inquiring about obtaining financial assistance for their country.

Ukraine on June 6 threw what could be a major wrench in the works of a Turkey-mediated plan to open shipping corridors out of Ukrainian ports when Kyiv officials said it would take six months to ... more

CBR’s Nabiullina says situation is stabilising after keeping rates on hold at 20%, announces the first Russian QE programme for bonds

Central Bank of Russia (CBR) Governor Elvira Nabiullina said that the economy is stabilising and the initial shock caused by the West’s imposition of extreme sanctions is starting to wear off in ... more

Uzbek media outlet Spot has compiled a list of Uzbekistan's domestic banks in terms of their profitability following the release of 3Q results. Its analysis showed that almost all of the financial ... more