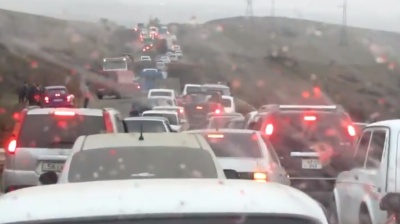 Videos on social media showed lines of cars leaving Stepanakert on November 8, although the scope of the exodus could not be confirmed independently, RFE/RL reported.
By bne IntelIiNews November 9, 2020

Azerbaijan and Armenia are reportedly close to striking a meaningful ceasefire deal over the disputed territory of Nagorno-Karabakh and surrounding regions occupied by Armenia since 1992.

Middle East Eye (MEE) on November 8 quoted Turkish sources as saying the deal would mandate Armenia to cede a large chunk of territory while placing a Turkish and Russian peacekeeping mission in the area to uphold a ceasefire.

The report came on the same day that Azerbaijan announced it had captured Shusha (known to Armenians as Shushi) Nagorno-Karabakh's second-largest city. The announcement sparked celebrations in Azerbaijani capital Baku and in areas of Iran where most of the country’s 16mn or so Iranian-Azerbaijanis live, but Armenia denied the claim, saying battles were ongoing in and around Shusha, a mountain citadel. Armenian Defence Ministry representative Artsrun Hovhannisian said in a Facebook post that "battles in Shushi continue; wait and believe in our troops." Armenia had earlier reported "fierce combat" near the city.

The sources who spoke to Middle East Eye on condition of anonymity said that the rapid progress of Azerbaijani forces on the ground had pushed Armenia to consider the Russian mediation plan, which is backed by Turkey, to stop the conflict.

Turkish President Recep Tayyip Erdogan and his Russian counterpart, Vladimir Putin, reached an understanding on the components of a draft deal on November 7 in a phone call, the sources were further cited as saying.

They were also quoted as outlining how Armenia will immediately withdraw from five out of seven occupied raions (a type of administrative unit of several post-Soviet states) surrounding Nagorno-Karabakh, once both sides agree to the conditions of the truce; Yerevan will pull out from the remaining two raions in 15 days; the two sides will possibly agree to the establishment of two corridors, with one road leading from Armenia to Nagorno-Karabakh and a second corridor connecting the Azerbaijani exclave of Nakhchivan—which borders Armenia, Turkey and Iran—to Baku.

"The Azerbaijani government doesn't want to rapidly seize [the main Nagorno-Karabakh city of] Khankendi [Stepanakert in Armenian] and cause civilian casualties," one Turkish sources was cited as saying by MEE, adding: "This deal stops the possible humanitarian crisis while honouring the legitimate Azerbaijani demands on the territory."

Shusha/Shushi has great cultural and symbolic value to both Azerbaijan and Armenia. Its Armenian Orthodox cathedral was hit by Azerbaijani shelling in October. On November 8, unconfirmed reports surfaced that the Yukhari Govhar Agha mosque—which Azebaijanis have been unable to access for almost 30 years—has also been damaged by shelling.

Nagorno-Karabakh has been held by Armenian forces for nearly three decades, despite four UN Security Council resolutions urging them to withdraw as it is internationally recognised as part of Azerbaijan.

At least 5,000 military and civilian deaths may have occurred in the conflict since fighting broke out on September 27, according to Kremlin estimates.