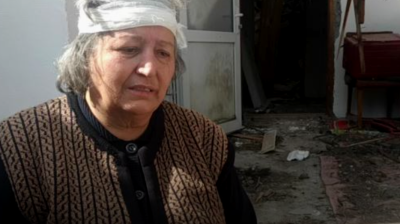 A civilian in Ganja, Azerbaijan, explaining how she was injured in what Baku says was an Armenian attack.
By bne IntelIiNews October 13, 2020

Azerbaijani President Ilham Aliyev on October 12 repeated calls for Turkey to be involved in the mediation process aimed at resolving the Nagorno-Karabakh conflict.

For the past three decades, Russia, France and the US have co-chaired the OSCE Minsk Group that addresses the dispute over the mountainous enclave but since the worst fighting over the territory broke out just over two weeks ago, Azerbaijan—aggressively backed by Ankara, though the Turks deny assertions that they are assisting Baku with military advisers, Syrian militia mercenaries and military hardware—has complained that it does not regard France—home to a sizeable French Armenian community—as neutral in the conflict and would like Turkey to be given a seat at the table. Armenia, meanwhile, has accused Azerbaijan of allowing Turkey to run its foreign policy.

“Even if many Western countries do not want to accept it, Turkey’s word is big, it’s fully independent,” Aliyev said.

But Russian Foreign Minister Sergey Lavrov—who in the early hours of October 10 in Moscow talks brokered a humanitarian ceasefire, which appears on the verge of completely collapsing given multiple accusations from each side of the other making major post-ceasefire attacks—responded that there was no plan to change the talks format to include Turkey.

The fighting is the worst since a 1994 ceasefire ended the Nagorno-Karabakh War that killed at least 30,000.

Azerbaijan has said 41 Azerbaijani civilians have been killed and 207 wounded since September 27. It has not disclosed information about military casualties.

Turkey ‘must do more for truce’

October 12 also saw Luxembourg repeat European Union calls for Turkey to make greater efforts to secure an end to the hostilities. Speaking before a meeting of EU foreign ministers, Luxembourg’s foreign minister, Jean Asselborn, urged Ankara to do more to stop the latest flare-up of the decades-old conflict. “Turkey has not called for a truce yet, and I believe they are completely wrong with this position,” Asselborn said.

“I think the message from Luxembourg will be a call on Turkey, a Nato member, to help arrange a ceasefire quickly.”

Turkey said in a statement that its defence minister, Hulusi Akar, had told Russian Defence Minister Sergei Shoigu by telephone that Armenian forces must be removed from Azerbaijani territory. Turkey backed Azerbaijan’s offensive to “retake its occupied lands”, the statement said, adding that Baku “would not wait another 30 years” for a solution.

Zohrab Mnatsakanyan, Armenia’s foreign minister, meanwhile, met Russian Foreign Minister Sergei Lavrov in Moscow on October 12. He accused Azerbaijan of acting to expand Turkey’s influence in the region and of using pro-Turkish mercenaries from Syria—charges both Ankara and Baku deny.

Accusing Azerbaijan of ceasefire violations, Mnatsakanyan said: “We want the ceasefire, we want verification mechanisms on the ground, which will indicate the perpetrator, which will demonstrate the party that is not faithful to this ceasefire.”

In Beverly Hills on the afternoon of October 11, around 35,000 demonstrators protested outside the Turkish Consulate in a show of solidarity with Armenia, the Los Angeles Times reported. California has a substantial population that is part of the Armenian diaspora.

Belarus' self-appointed President Alexander Lukashenko has banned his security forces from arresting Belarus’ most famous protester: the 73-year old Nina Baginskaya, who has become an international celebrity for her no-compromise protests.