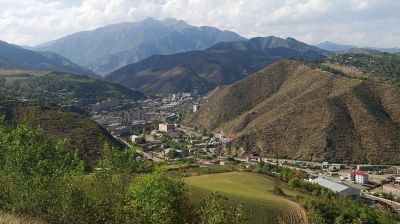 The dispute over Iranian truck drivers driving through Azerbaijani territory in order to supply goods to Armenia and ethnic-Armenian-held parts of Nagorno-Karabakh worsened on September 15 when Azerbaijan’s internal affairs ministry confirmed that two Iranian truckers had been detained.

Earlier, Armenian media reported that two truck drivers from Iran were detained by Azerbaijani police on the Goris-to-Kapan (the towns are known as Gorus and Gafan to Azerbaijanis) highway.

Azerbaijan’s move against Iranian trucks supplying Armenia via a short trip across Azerbaijani territory is almost certainly related to Baku’s dissatisfaction that Armenia has not facilitated its ambition to open a land corridor across Armenian territory to link up with the Azerbaijani Nakhchivan exclave. Azerbaijan claims that such a corridor should be opened in accordance with the ceasefire deal brokered by Russia in November 2020 to end the Second Nagorno-Karabakh War, but Armenia says the deal promises no such thing.

Azerbaijani interior affairs ministry spokesman Ehsan Zahidov told Sputnik Azerbaijan that the drivers entered Azerbaijan illegally: "Trucks crossing from Armenia to Azerbaijan illegally were identified and [the drivers were] detained by the Interior Ministry, the State Customs Committee and the State Border Service," he stated. He added that "measures” would now be applied “in accordance with legislation”.

A report from News.am said that the drivers, having poured cement in Nagorno-Karabakh, were on the return journey to Iran when they were stopped by police.

Armenian Prime Minister Nikol Pashinyan said that as the state frontiers of Armenia and Azerbaijan were drawn according to the former Soviet era borders, the Goris-Kapan road—which largely runs through Armenia’s southern Syunik region—does indeed cross into Azerbaijan twice: "I suppose that since the text of the agreement [brokered by Russia to end last year’s war] does not address the circumstance as regards the passage of foreign goods, Azerbaijan decided to apply this mechanism [against the Iranian drivers]."

Earlier, Azerbaijan confirmed that it has been asking $130 in road tax from truck drivers entering its territory on the Goris-Kapan road. It is not clear, however, that the tax has been demanded from any non-Iranian foreign truck drivers.