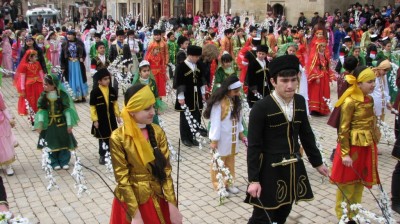 Festive celebrations of the ancient Spring New Year in Azerbaijan have been cancelled this year due to the coronavirus pandemic.
By Daniel Rad March 13, 2020

Azerbaijan has reported its first death caused by the coronavirus, BBC Azeri reported on March 12 as the country continued to go into lockdown in response to the spread of the pandemic.

The person who died, a 51-year-old woman from Baku, reportedly returned from Iran in recent days before being struck down by the COVID-19 strain, the report said.

The official number of coronavirus infections in Azerbaijan was 13 before the death. However, Azerbaijani expatriates have suggested that the number could be much higher, with the government actively under-reporting cases—something likely in neighbouring Iran, where the virus outbreak is the third worst in the world.

Azerbaijani authorities have, meanwhile, like Iran, taken a public health decision to cancel all Nowruz spring new year festivals that were set to start next week.

Nowruz is celebrated across parts of Eastern Europe, the Caucasus, Iran, Russia and Central Asia. It is an annual holiday stemming from the Persian New Year that starts from March 20, when the Iranian and Afghanistani new year gets under way.

"Due to the expansion of the global outbreak of the virus, appropriate preventive measures have been strengthened in our country," an official statement from Azerbaijan said.

The cancellation of the Nowruz event in Azerbaijan marks the first time the ancient festival will be skipped since independence from the Soviet Union.

Azerbaijani authorities have announced that they will keep the border with Iran closed for another two weeks due to the coronavirus epidemic, APA reported on March 12.

The Operative Headquarters of the Cabinet of Ministers announced that the decision to close the border followed the World Health Organisation (WHO) upgrading the spread of the Covid-19 virus to a full pandemic – meaning the virus has multiple epicentres from which to spread from.

“In order to prevent the spread of the virus in the territory of Azerbaijan [a decision] adopted on 29 February 2020. The decision to keep the border with the border under a restrictive regime was extended for the next two weeks,” the organisation said.

The head of the Azerbaijani representative office at the WHO said experts from Copenhagen and Geneva were visiting Baku to discuss the situation.

"In order to help the Azerbaijani Government with coronavirus, the experts from Copenhagen and Geneva offices of the WHO are on a visit to Azerbaijan. We are working together with them. Yesterday, a meeting was held at the Ministry of Health together with TABIB, the State Agency for Compulsory Medical Insurance and the Azerbaijani Food Security Agency," spokesperson Hande Harmanci said.

Azerbaijan and Turkmenistan have agreed on a new programme to install fibre-optic cables linking the two countries under the Caspian Sea, Trend reported on April 16. The deal would see ... more

Azerbaijan, Iran to start construction of cross-border bypass at Astara

Border officials of Iran and Azerbaijan this week met to discuss a planned 1,300-metre multi-lane dual carriageway that will span the border of the two countries by the city of Astara located on the ... more