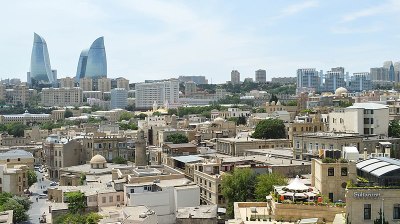 Baku's books are coming under pressure, but rainy-day funds built up from hydrocarbon export revenues are saving the day.
By bne IntelIiNews August 26, 2020

Azerbaijan's revised 2020 budget highlights the hit to its public finances from lower oil prices and the pandemic, Fitch Ratings said on August 26 in a non-rating action commentary.

The government’s planned deficit has been raised to 12.4% of GDP from 2.3% in the original budget, the ratings agency noted. An increase in the planned transfer from the country’s sovereign wealth fund (Sofaz) to the budget should support the Azerbaijani manat (AZN) 1.7 to USD exchange rate, which has faced less pressure in recent months, it also observed.

“The key change in the revised consolidated budget, approved by the president in mid-August, is a lower oil price assumption,” Fitch said. “Fiscal projections are now based on an average of USD35/b (consistent with Fitch's forecast for Brent crude), compared with USD55/b in the original 2020 budget. Spending has been revised up by 1.2pp of GDP. This incorporates a rise of 0.4pp of GDP in health expenditure compared with the original budget, additional capital investments to stimulate the economy amounting to 0.3pp of GDP, and 0.5pp of GDP in additional unspecified measures.”

As with many other sovereigns, countering the economic impact of the coronavirus (COVID-19) pandemic has necessitated a temporary suspension of the government's fiscal rule, Fitch also said.

Fitch rates oil and gas-rich Azerbaijan at ‘BB+’, with a ‘Negative’ outlook (revised from ‘Stable’ in April).

“Despite the severe adverse impact on the fiscal deficit, large savings provide Azerbaijan with a significant degree of financing flexibility. The consolidated budget deficit will be primarily financed by a drawdown of Sofaz assets and the large cash deposits in the government's single treasury account,” Fitch also said in its commentary.

It added: “Sofaz assets were broadly flat over the first six months of 2020, ending June at USD43.2 billion, with changes in the value of its portfolio offsetting lower oil revenues and transfers to the budget. With nominal GDP falling in US dollar terms and its portfolio primarily in foreign currency-denominated assets, Sofaz assets will remain in excess of 85% of GDP. Consequently, while most sovereigns are projected to post large rises in debt/GDP in 2020, we forecast Azerbaijan's general government debt to increase by just 4.0pp to 23.0% of GDP, with much of that resulting from a sharp fall in the denominator.”

Sofaz transfers to the state budget were increased to the equivalent of $7.2bn from $6.7bn, supporting the AZN/USD de facto fixed exchange rate of 1.7, Fitch said. Sofaz sales of FX for manats to transfer to the budget are a key source of foreign currency and helped preserve exchange rate stability, notably in March, it added.

The 2020 economic growth assumption in Azerbaijan’s revised budget has been cut to -5.0% from 2.4%. Fitch forecasts -4.2%. The cut reflects coronavirus containment measures and Azerbaijan's participation in OPEC+ oil supply cuts.

“A renewed lockdown in July highlights the lingering risk of coronavirus in Azerbaijan and downside risks from further waves of infections and renewed lockdown measures, which could further pressure real GDP growth,” Fitch concluded.

Turkish lira finds another all-time low with Erdogan’s Caucasus adventurism no help at all
Armenia accuses Turkey of sending in direct military support for Azerbaijan including F-16s
COMMENT: Don’t disregard potential for Armenia and Azerbaijan’s war to spiral into something much bigger

Turkish lira finds another all-time low with Erdogan’s Caucasus adventurism no help at all
11 hours ago
Head of MS Estonia tragedy investigation says ship went down after collision with submarine
20 hours ago
Armenia accuses Turkey of sending in direct military support for Azerbaijan including F-16s
20 hours ago
Bucharest mayoral race win puts reformist USR in strong position ahead of general election
1 day ago
Belarusian police use stun grenades, pepper spray and fire shots to control Sunday's mass rallies
1 day ago