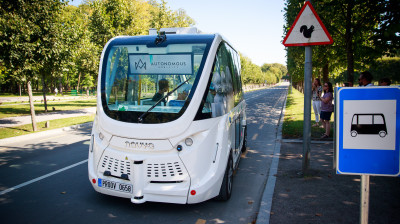 When a passenger vehicle and a self-driving bus collided in the Estonian capital Tallinn on July 14, this was the story of the day for tech-savvy Estonians. But it also puzzled the local transportation authority, suddenly faced with the questions of how to regulate driverless artificial intelligence (AI)-based traffic and avoid accidents of this kind.

Reportedly, the accident occurred on the intersection of Lennujaama street and Sepise street when a Skoda Octavia passenger car popped up in front of a self-driving bus that had the right of way. The collision took a matter of seconds.

The police were called to investigate following a call from the Skoda driver, who insisted that the parties to the accident didn’t know how to record the circumstances of the accident. The operator of the self-driving bus was helpless in the situation, too.

Although the preliminary check showed that none of the bus’ e-sensors suffered, the vehicle’s systems will be examined thoroughly, taking into consideration the long-term impact from the findings on Estonia’s driverless traffic.

The insurer of the firm operating self-driving buses told local media that it does not matter to the insurer whether a vehicle that has been deemed fit for traffic has a driver or not.

It added that if it is clear which vehicle caused the collision and there is no disagreement between the parties, compensation for damage will be paid out regardless of the fact that one party was a self-driving vehicle.

Although the landmark rules for the use of artificial intelligence-driven vehicles are yet to be laid down by the Estonian Ministry of Justice, having learnt of the Tallinn accident, some commentators were quick to notice that the cart has been put before the horse. So far, the Ministry of Economic Affairs and Communications allows companies to test self-driving vehicles only if they are accompanied by safety operators.

The main aim of the so-called kratt law that is currently being developed by a working group of AI experts working alongside the government office is to enable the use of AI in various fields, but at the same time protect people from possible negative outcomes.

Autonomous buses have been tested in two locations in Tallinn. The very first autonomous bus drove around in Tallinn in 2017 when Estonia held the European Council presidency.

Dubbed "e-stonia", Estonia, a country of 1.3mn people, is known for being a trailblazer in technology, with Estonians having already helped pioneer the likes of Skype, Transferwise, e-voting and delivery robots.

BALTIC BLOG: From the Aegean to the Gulf of Finland, China cements its presence across Eastern Europe

Reflections from our correspondents on the ground in the Baltic states of Estonia, Latvia and Lithuania.