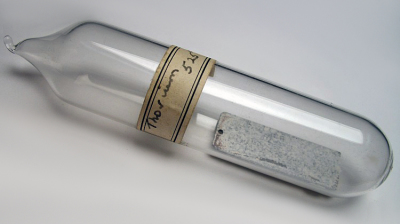 Corroded thorium metal in an ampoule.
By bne IntelliNews December 18, 2019

Kyrgyz President Sooronbai Jeenbekov has signed a decree banning the exploration and mining of uranium and thorium deposits in Kyrgyzstan, his press service reported on December 16.

The decree is likely a reaction to protests that arose earlier this year against the development of uranium deposits after reports emerged about exploration works launched in the Kyzyl-Ompol area of the Issyk-Kul region.

The law aims to ensure safety from radiation and environmental safety by prohibiting geological exploration and development of uranium and thorium deposits in the Central Asian nation. It has also banned the dumping and transfer of the material, the report said.

Additionally, the report noted that the import of “raw materials and waste” containing radioactive substances is prohibited by law.

Thorium was discovered in 1828 by Swedish chemist Jons Jakob Berzelius, who named it after Thor, the Norse god of thunder. It is found in small amounts in most rocks and soils, where it is about three times more abundant than uranium.

The metal is fertile rather than fissile, and can only be used as a fuel in conjunction with a fissile material such as recycled plutonium. Thorium fuels can breed fissile uranium-233 to be used in various kinds of nuclear reactors. Molten salt reactors are well suited to thorium fuel, as normal fuel fabrication is avoided, according to the World Nuclear Association.

The OSCE representative on freedom of the media, Harlem Desir, on August 14 expressed his concern over the shutting down of the Aprel TV channel in Kyrgyzstan. He called for respect for media ... more

Kyrgyz security officials have charged ex-president Almazbek Atambayev with masterminding a murder, while also accusing him of plotting to stage a coup following the bloody confrontation between his ... more