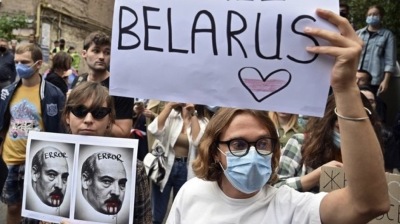 Belarus is still suffering from the second wave of the corona pandemic, but both mass inoculation and the production of Russia's Sputnik V vaccine have already begun.
By bne IntelliNews March 31, 2021

The total number of coronavirus (COVID-19) cases has exceeded 320,000, with the country counting as many as 995 more new coronavirus cases in the last 24 hours, the health ministry reported on March 29.

The death toll is 2,237 including a number of patients with chronic diseases since the epidemic outbreak, it said, adding that ten such deaths were reported during the past day.

The official figures remain highly suspect, as Belarus' self-appointed President Alexander Lukashenko has downplayed the severity of the epidemic from the start, advising his people to “drink vodka” as an effective way of protecting themselves.

Belarus did not impose any coronavirus lockdowns and mass gatherings were not banned. The mass demonstrations that began following the disputed August 9 presidential elections saw over 100,000 rally in just Minsk every weekend in the midst of the first wave of the epidemic.

The authorities say the country’s public health system is coping with the second wave of the epidemic and say a third wave has not yet begun, but could start in the coming months.

The government has taken minimum precautions; however, there is an official order to wear face masks in public places.

A mass inoculation programme has begun. Russia held large-scale human trials of its Sputnik V vaccine in Belarus as part of the testing process from October 1 and has since set up production of the vaccine in Minsk that is due to come online this month. The Minsk-based factor has already produced the first doses that are currently being tested for quality and purity.

A pilot batch of the Russian Sputnik V vaccine was manufactured in Belarus on February 26. Mass production of this vaccine kicked off on March 25.

Belarus was second after Russia to register this vaccine. Mass vaccination was launched in late December 2020 after the first batch of the Russian vaccine had been delivered to the country. It is planned to inoculate some more than 5.5mn people.

On February 19, Belarus also received a batch of 100,000 doses of China’s Sinopharm vaccine as a gift and its mass use began from mid-March. China is one of the biggest investors into Belarus, which it is planning to use as a production and logistics base for its business in Europe.

According to Lukashenko, the country may develop its own vaccine by the end of the year.

Over 200 arrested at “Freedom Day” protest in Belarus, but turnout was low

CEE reels as third wave of COVID-19 breaks
Belarus’ opposition abandons attempts at dialogue with Lukashenko, Tikhanovskaya branded a terrorist
Over 200 arrested at “Freedom Day” protest in Belarus, but turnout was low