Belarus decision on Eurobond placement in 2020 depends on Russian loans 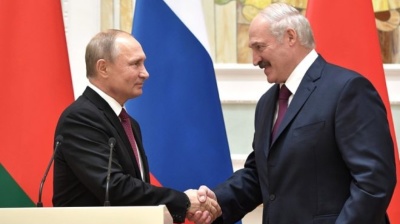 Minsk was due to get a $630mn loan from Russia this year that is a major part of the government's funding plans, but the loan has become snarled in political wrangling
By bne IntelliNews July 3, 2019

Belarus may avoid placing a Eurobond in 2020 if Russia releases an inter-governmental loan of $630mn that has been snarled up in politics, the Belarusian Finance Minister Maxim Yermolovich said on July 2.

"We'll probably adjust our plans [if we get the Russian loan] regarding tapping the debt market next year as we had been planning a possible Eurobond," Interfax quoted Yermolovich as saying last week. "If we get this $630mn there'll be no need to borrow on the market."

If Minsk obtains the Russian loan it will use it to repay obligations in 2020-2021. "That is the loan would be an additional source not for the current year but a debt policy source for the longer term," Yermolovich said.

Minsk also announced this week that it has scrapped plans to issue a so-called Panda bond on the Chinese market that was a more speculative part of the government’s funding plans for this year. However, a deal to borrow $500mn from the China Development Bank by the end of this year are still in place and will go a long way towards covering the Russian loan, if it fails to show up.

In June, Yermolovich told bne IntelliNews in an interview that Russia has suspended allocation of loans to Belarus for a total amount of $800mn. "But, as turned out, there are some difficulties with the Russian $600mn loan. The decision on the $200mn loan from [the Russia-led Eurasian Fund for Stabilisation and Development] EFSD has been delayed for some reason too, although Belarus has fulfilled all requirements," he said.

This year, Belarus was planning to repay external commitments with the help of a $600mn loan of the Russian government, a new $200mn tranche of the EFSD the budget surplus ($700mn), and through borrowings on the domestic market. The Russian loan is key as it is enough to negate the need to tap the international capital markets for more money this year.

According to the Belarusian budget for this, if the Russian loan is secured the state will use foreign exchange earnings from exports (mainly oil products) to pay off a quarter of its external debt. If the loan is not forthcoming and Russia fails to pay compensation for a change in oil export duties that will hurt the Belarusian budget – the so-called “tax manoeuvre” – Minsk might choose to refinance 100% of its external debt, Yermolovich told bne IntelliNews.

It is not clear what the problem with the $600mn loan is, but it seems the loan has got caught up in negotiations between Moscow and Minsk on bring the two countries closer together. The money has already been allotted to Belarus in the Russian budget and all the necessary legal work has already been approved by the Russian Duma.

But in June, Anton Siluanov, Russian First Deputy PM and Finance Minister, said that Russia is not going to provide new loans to Belarus nor discuss possible compensation for Russia’s tax manoeuvre in the oil sector until the two countries agree on a vision for their further "integration".

The official told journalists on June 8 that Moscow and Minsk have agreed that, "we need to make comprehensive decisions that would concern a vision for our further integration" regarding the so-called Union State treaty. "Then we will understand the level of our financial relations," Siluanov added.

Belarusian President Aleksandr Lukashenko and his Russian counterpart Vladimir Putin have discussed possible integration of the two countries "very tentatively" and instructed the governments to find areas of common interest before 21 June.

On May 27, Belarusian Minister of Foreign Affairs Vladimir Makei said in Moscow at the talks with his Russian counterpart Sergei Lavrov said that the Belarus-Russia integration groups set up at the instruction of the two presidents will soon unveil the results of its work.

No details of the proposals have so far been made public, which has raised fears over possible loss of Belarus' sovereignty in exchange for Moscow's energy subsidies and loan support.

The IMF warned earlier this year Minsk needs a “Plan B” to cope with budget short falls that will get worse each year in the coming years, but Yermolovich told bne IntelliNews that a Plan B is already in place.

According to the Belarusian finance ministry, the country’s budget revenue losses from the tax manoeuvre in 2019 alone were estimated at BYN600mn ($300mn), and that the losses might total $2bn by the end of 2024. However, in December, Lukashenko's spokesperson said in a televised interview that Minsk already lost $3.6bn due to Russia's cut of energy subsidies to Belarus.

Due to Moscow's tax manoeuvre Belarus will lose extra $11bn within the next four years, the spokesperson added. The tax manoeuvre shifts the tax burden from export duty on oil and petroleum products to mineral extraction tax (MET) on oil production. It envisages a gradual reduction in the rate of export duty on oil and petroleum products from 30% to zero in the period from 2019 to 2024 and a proportionate increase in MET.

In April, Putin greenlighted the allocation of a new $600mn government loan to Belarus. Minsk would use the money to repay previous Russian loans. The two governments are discussing procedures needed for signing the loan agreement.

The Russia-led EFSD is also considering the allocation of the seventh $200mn tranche to Minsk. In October 2018, the EFSD allocated the sixth $200mn support tranche to cash-strapped Belarus from the lender's $2bn loan agreed with Minsk in 2016.

The allocation of the tranche followed reports that Moscow intends to suspend the allocation of new tranches from $2bn support package agreed between Minsk and the EFSD, as well as suspend negotiations on a new $1bn intergovernmental loan, which could be a painful blow for the reserves.