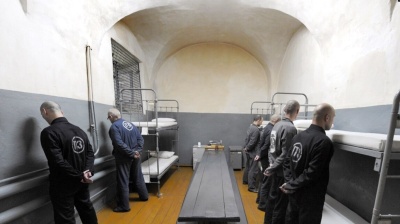 Picture from inside a Belarusian prison cell. / www.rferl.org
By bne IntelliNews May 21, 2022

On Wednesday, 18 May, Belarusian strongman Alexander Lukashenko signed an amendment to the law on the death penalty in Belarus which broadens the permitted use of death penalty by firing squad for acts of terrorism.

With the new amendments, the death penalty can also be applied to “preparations” for acts of terrorism relating to the already existing definitions in the criminal code; among these are acts of terrorism committed by an organised group. The amendments will enter into force after 10 days.

Simultaneously as Lukashenko signed these amendments, a trial began on Wednesday for 12 people accused of “terrorism” or "preparations for acts of terrorism” in an organised group.

The accused were all part of the “Belarusian railway partisans”, who successfully sabotaged several relay stations and signal boxes along Belarus’ railways this year in an attempt to hinder the movements of Russian troops and supplies engaged in the invasion of Ukraine.

As Lukashenko put Belarus’ southern borders, hospitals and logistics networks at Putin's disposal to aid in his invasion of Ukraine, Belarusians attempted to protest against the war, but over 900 people ended up being arrested in just a couple of days.

Some people revived the old railway partisan tactics employed by Belarusians during the Nazi occupation in WW2, and oppositional telegram channels allowed people to send in videos of Russian troop movements within Belarus.

This caused sufficient trouble for the Russian advances into northern Ukraine for both Belarus’ and Russia’s security services to become heavily engaged in the matter.

A few weeks into the war, Belarus’ security service (KGB) initiated a broad sweep of the state railway company for suspects involved in opposition activity, and arrested over 30 people. All were forced to record repenting videos where they “admitted” their crimes.

After Lukashenko and Putin met in Russia on April 12, the KGB and the Russian security service began undercover operations in southern Belarus to catch people taking pictures of troop movements and sending them to opposition channels.

The fear of a domestic political revival has been growing in Lukashenko’s head and among the country’s top security officials. Fearing that these people might inspire others, Lukashenko has decided to expand the death penalty's scope in order to be able to completely remove these people.

With this, he hopes to crush any will of resistance against his regime.

Belarus is the last country in Europe that still imposes the death penalty and the Council of Europe has been working on getting the regime to abandon it for many years. However, these attempts have been unfruitful, and since Lukashenko came to power in 1994 Belarus has executed over 200 people.

In March, the UN Human Rights Committee condemned Belarus for having executed Viktar Paulau last year, who was sentenced to death on murder charges. His family only received notice of his execution this year, over half a year after suspicions first arose of him having been executed.

Since protests broke out in Belarus over the fraudulent 2020 elections, the regime has accused several exiled opposition activists of planning to commit acts of terrorism, among them exiled opposition leader Svetlana Tikhanovskaya.

While the Minsk regime is not bothered about the West’s or the UN’s moral stance against the death penalty in its pursuit of instilling fear in the population, the only way for Lukashenko to decrease the sanctions’ pressure on Belarus’ economy is to make some sort of concessions to the West.

However, this is extremely hard for him, since he cannot move away from Putin who helps him cling to power, nor can he ease up on repressions at home in fear of a revived initiative from the opposition.

Already in March, as the Council of Europe suspended its co-operation with Minsk, the Belarusian Foreign Ministry responded that this would pause “constructive interaction” on a number of issues, including the death penalty.

In the light of the recent expansion of the death penalty, the Belarusian MFA’s response appears more as a warning and a form of blackmail than just stating facts: a way of showing that if the West suspends co-operation, then Belarus will simply go ahead with doing all the things that the West opposes.

This kind of tactic is sure to only make diplomatic relations worse and shows that there is no genuine will from Lukashenko to improve relations, only the will to cling to power.

Croatian president says Western sanctions aren’t working
10 hours ago
Kosovo’s PM Kurti says risk of new conflict with Serbia is high
11 hours ago
End of Vienna talks means US, Iran political approvals now needed to revive nuclear deal
19 hours ago
Western capitals wonder what kind of sanctions deal Erdogan may have cooked up with Putin
1 day ago
Leaders of Serbia and Kosovo to meet as they pull back from brink of conflict
2 days ago