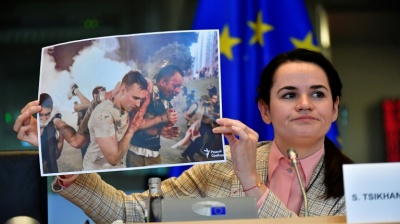 Opposition leader Svetlana Tikhanovskaya has been touring Europe lobbying leaders to impose harsher sanctions on Minsk in the face of the escalating violence in her home country. Now Belarus hits back with tit-for-tat sanctions on Europe
By bne IntelliNews November 23, 2020

The Belarusian government hit the EU and a number of European countries with tit-for-tat sanctions on November 22 and suspended all dialogue with the EU on human rights, according to the Belarusian Foreign Minister, Vladimir Makei, in an interview with Belarus-1 TV channel.

"If we are affected, if any sanctions are imposed against us, we will, of course, be forced to adequately respond. You know that the European Union has imposed additional sanctions against a dozen and a half people. We will also expand our sanctions personal lists," the minister said as cited by UAWIRE.

Europe and the US last month imposed sanctions on Belarus in protest against the police brutality inflicted on the population by security forces trying to repress mass demonstrations against Belarus' self-appointed President Alexander Lukashenko following the disputed August 9 presidential elections. The EU has refused to recognise the results of the elections, which are believed to have been massively falsified to give Lukashenko a landslide win.

While the sanctions will have little effect on Europe, which has minimal trade and investment in Belarus, they will hurt the European Bank for Reconstruction and Development (EBRD), which had opened an office and resumed investments into the country this year after a long hiatus. The European Investment Bank (EIB) has also got caught up in the row. The Foreign Ministry has decided to freeze its activities with both institutions.

"We suspend this dialogue until the European Union decides to change the policy of the European Bank for Reconstruction and Development and the European Investment Bank," the Foreign Minister said.

He also stressed that the main course of Belarus is focused on Russia, but the country is not going to give up other areas of foreign policy.

"We have always said that Russia is our main strategic ally and main partner, and whether we like it or not, the main vector, the emphasis of our co-operation will be in this direction," Makei added.

The EU has already imposed two rounds of sanctions on Belarusian officials that include a blacklist of 55 representatives of the country's leadership, including the president. Ukraine and several other eastern European countries joined the EU sanctions last week.