Belarus is bleeding money as reserves fall $1.4bn in a month 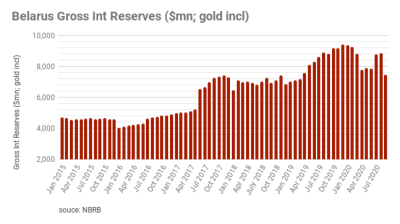 Belarus hard currency reserves fell by $1.4bn a month to $7.4bn, not enough to ensure the stability of the national currency
By bne IntelliNews September 7, 2020

Belarus’ hard currency reserves fell by $1.4bn to $7.46bn as of September 1, down some 16% from $8.8bn (including gold) just before the current protests began in early August, according to National Bank of the Republic of Belarus (NBRB).

The country's economy was weak even before the population revolted against Belarus' self-appointed President Alexander Lukashenko, who massively falsified the August 9 presidential elections to give himself a landslide victory. He was running against former English teacher Svetlana Tikhanovskaya, who beat him by a landslide, according to the “real” results released by just under two dozen rebel polling stations.

With some $3bn of debt obligations to meet this year, the state was already under pressure. The $8.8bn included the proceeds from a $1.25bn Eurobond issue in June but following the police brutality against protesters in the first days of the protests, Minsk has been effectively cut off from the international capital markets since.

Belarus’ Eurobonds were already the worst performing in the EM universe in June as the country was suffering from a double whammy of the coronacrisis and the biggest protests that the incumbent faced in the pre-election period following the state’s decision to begin locking up prominent bloggers and opposition candidates. Things have got much worse since then.

The $8.8bn of reserves is equivalent to 2.4 months of import cover, where economists say a minimum of three months is necessary to maintain the stability of the national currency. As bne IntelliNews has reported, the Belarusian ruble (BYN) has already lost some 11% of its value against the dollar and is predicted to slide further.

Nervous about a new economic crisis and yet another deep devaluation, the population have been emptying ATMs of dollars and withdrawing hard currency from banks, afraid the state might freeze their accounts or forcibly convert their dollars to rubles. In addition, the government made redemption payments of $351.7mn on foreign and domestic debt in August.

Fitch reported last week that liquidity in the banking system is already being squeezed, but the falling reserves will only make things worse. Of the $8.8bn only $4.26bn is in cash dollars, with another $3.13bn held in gold and the rest in assorted currencies and other assets.

The fall in reserves by $1.4bn in the last month was drawn almost entirely from the cash portion of the reserves and the dollar holdings have shrunk to $3.21bn as of September 1, says the NBRB. As the Institute of International Finance (IIF) warned in a recent paper, Belarus is in danger of sliding into a fresh economic crisis unless the current political crisis can be resolved soon.

Belarus' Lukashenko makes his big announcement, but it wasn't about merging Russia and Belarus