Belarus' Lukashenko makes his big announcement, but it wasn't about merging Russia and Belarus 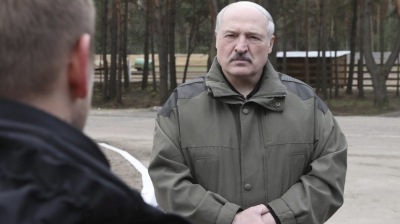 Belarus' President Alexander Lukashenko made his big announcement on April 24, but it wasn't about merging Russia and Belarus as some had suspected. It was his decision to change the law on presidential succession that lays the groundwork for his son to take over if he dies.

Lukashenko said that in the event of his death or in an emergency situation that would pass his powers to the National Security Council, where his eldest son plays a prominent role.

"Tell me, if there is no president tomorrow, do you guarantee that everything will be okay? No. Therefore, in this case, I will sign a decree in the coming days on how the government will be built in Belarus. The President was shot – tomorrow the Security Council will be empowered. It is necessary to introduce a state of emergency immediately, up to a military one, if someone moves at the border. And the Security Council must make a decision," said the Belarusian leader, as cited by Ruptly.

Lukashenko claimed that Russia had helped foil an assassination attempt against himself and his son last week and said the hit had been organised by the US. The Russian Federal Security Service (FSB) arrested two suspects in Russia that it claims were planning a coup d'état that involved the two murders and also blacking the entire Belarusian capital out to throw police and security forces into disarray. Russian President Vladimir Putin mentioned the plot as well in his State of the Nation speech on April 21.

Many observers have suggested that President Alexander Lukashenko, who has ruled with an iron fist since 1994, aims to establish a political dynasty, although Lukashenko denies this.

Currently Lukashenko is the head of the national Security Council, but his eldest son Viktor also has a seat and is regarded as the council’s informal leader.

Under the terms of the Belarusian constitution, if Lukashenko dies then the prime minister takes over. However, according to the changes proposed by Lukashenko this weekend the premier would be the nominal leader and the power to make all decisions would be made by the 20-person Security Council. Lukashenko promised to sign the decree in the near future.

The announcement suggests that Lukashenko has little interest in changing the constitution to give more power to the people. He has himself been promising to make these changes for several years and the Kremlin has also put pressure on him to amend the constitution as a way of defusing the political crisis that broke out following the disputed election on August 9. Lavrov explicitly reminded Lukashenko of his commitment to change the constitution during a visit to Minsk last year.

Lukashenko has been dragging his heels on the changes that will also certainly see, under Kremlin pressure, his powers reduced. He initially promised to produce a draft version of the proposed changes at an All People’s Assembly earlier this year, but in the end produced nothing but promised the draft would be ready by the end of this year. In the meantime the opposition, led by the Co-ordinating Council, has released its own version of a new constitution and taken the initiative in the debate.

Lukashenko reiterated his promises to produce a draft version by year end during an interview with the Russian RIA news agency at the weekend taped in December but not previously broadcast.

“And then the people will determine at a referendum if there should be a new constitution or not,” he said. It was his firmest statement so far about the timing of the reform.

Belarusian opposition leaders this week voiced fears that Lukashenko would seek much closer ties with Russia as his power wanes, leading to a loss of sovereignty for the nation of 9.5mn people. Lukashenko travelled to Moscow on Thursday for a meeting with Russian President Vladimir Putin.

Junta mechanism in the works

A widely regarded Belarusian political analyst believes that rather than changing the constitution for the people’s benefit, Lukashenko is preparing to put his son on the throne and perpetuate his control of the country through his family.  “A pending junta mechanism is being created,” Shraibman said in an aticle following the decree’s announcement.

“Of course, we haven’t seen the decree yet, so it is possible that there will be another zilch at the exit, because the voiced document clearly contradicts Article 89 of the Constitution,” Shraibman wrote. “But since our times are difficult, sometimes not for articles and not for constitutions, I will offer two versions of why this decree is needed.”

In this case, the decree has a narrow goal to automatically by-pass the prime minister if Lukashenko is killed.

“In this logic, a decree is insurance against a bad prime minister. That is, if an enemy made his way to the second post in the country and staged a coup or was recruited by enemies, the Security Council takes everything into its own hands and demolishes the traitor by a majority of votes, even though he is formally chairman,” Shraiban said.

The version is a little lame, because the prime minister who agrees to head the conspiracy without agreeing with the security forces in advance will be very stupid. And if he does, then he will be able to manage the process and the insurance will not work for him, the Security Council, the VNS, or the Slavianski Bazaar.

The second version is more complicated and the decree is a preparation for larger changes that will be included in the new constitution, including changes during a state of emergency and martial law that also makes the Security Council the new centre of power.

“Since all political upheavals and changes of eras do not go according to the plan of the one who is trying to control them, with the signing of the decree we will be one step closer to a possible junta. Moreover, as one Belarusian political scientist correctly noted, this junta will come to power in full accordance with the law,” Shraiban wrote.

Belarus expands its use of the death penalty
1 day ago
The Mariupol siege is over as the last Azov defenders surrender
2 days ago
Kyrgyzstan: Eccentric health minister fights for his job amid claims of corruption and bullying
2 days ago
Azov commanders have remained behind in the Mariupol steelworks to continue the fight
2 days ago
Russia hopes Chinese carmakers will help revive Moskvitch brand
2 days ago