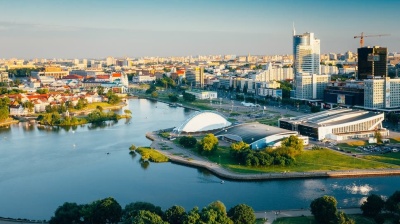 Belarusian President Aleksander Lukashenko handed over land in the capital Minsk to construction companies linked to the controversial Serbian Karic family, according to a newly published investigation by the Organized Crime and Corruption Reporting Project (OCCRP).

The investigation revealed that Zomex Investment, a company linked to the Karic family, and two affiliated companies, Dana Astra and Belinte Robe, were given more than 400 hectares of land in the Belarusian capital with a value of around $1bn.

Land registry records consulted by OCCRP reporters show that the three companies have at least 11 ongoing projects in and around Minsk, making them the biggest developers in the city.

According to OCCRP, construction is now “one of the most lucrative businesses in Belarus”, and in the last decade it has become the domain of private businesses rather than state-owned companies.

Specifically, says the investigation, "Most of the benefits of this boom have accrued to just three companies: Zomex Investment, Dana Astra and Belinte Robe.”

Until late 2020, the three companies were owned by Cyprus-registered Dana Holdings, which until recently was owned by Nebojsa Karić, son of businessman and former presidential candidate Bogoljub Karić.

However, days before the EU blacklisted Dana Holdings in December 2020, the holding company was removed as the owner of the three property development firms and replaced by a company registered in the United Arab Emirates called Enterprise Developments Holding Limited, OCCRP said.

According to OCCRP, the Serbian Karić brothers benefitted from their relationship with Belarus’ authoritarian leader Lukashenko, who has ruled the country since 1994. The report says this relationship has been “highly lucrative”; it notes that Zomex’s net profit for 2019 was over $35mn, and under an agreement with the government in Minsk Zomex doesn’t pay tax on its earnings.

The ties with the Belarusian president date back to the mid-2000s, when political rivals of the Karics started investigating their businesses and Bogoljub eventually fled Serbia for a decade.

Bogoljub Karic (profiled by bne IntelliNews) is a household name in Serbia, where green salads are sometimes dubbed “Bogoljub’s salad” because of his promises to rebuild Serbian production, using a green salad as an example of a Serbian product.

Together with his three elder brothers (Zoran, Dragomir and Sreten) and sister Olivera, Bogoljub Karic is owner of the conglomerate BK Group, which operates in Serbia, Russia and Belarus, and is mainly involved in construction.

BK Group was founded in Serbia in the 1990s, when the country was under the control of the late dictator Slobodan Milosevic. It racked up a series of firsts, founding Serbia’s first mobile network Mobtel, first dial-up internet provider EUNET, one of the first private banks in Serbia, Karci banka (later Astra banka), private television station BK TV and the first private university, BK University.

However, the “BK empire” soon fell victim to Karic’s bitter personal rivalry with former finance minister and central bank governor Mladjan Dinkic. In late 2001, Astra banka was put under central bank receivership over claims it had made secret payments to members of the Karic family.

Prosecutors accused the Karićs of unfairly profiting during Milošević’s rule, though the charges were later dropped, and five members of the Karic family were placed on EU travel ban lists.

Karic used his financial clout and his status as owner of a popular television station to fight back against Dinkic, before entering politics in 2004.

A one-time wedding singer, Karic successfully presented himself as a down-to-earth family man, becoming hugely popular among poorer, rural Serbs, but this wasn’t enough to win him the 2004 presidential election. After his defeat – he was placed third – Dinkic and other government officials doubled down on Karic, and he left Serbia for Moscow in 2006, a move that was to last for a decade. During his absence, several indictments were made against him, although nothing has been proved in court.

Ten years later, when the statute of limitations against him had finally expired, Karic landed in Belgrade on December 30, 2016 as a free man with an estimated net wealth of $750mn.

During Bogoljub’s time in exile, his wife Milanka and brother Dragomir were elected to the Serbian parliament. In 2009, Dragomir Karic invited Lukashenko to an economic forum at Kapaonik, Serbia. The following year, Dragomir was appointed to lead the construction of Minsk City, which was taken over by Dana Astra the following year.

When Lukashenko visited Serbia in 2019, he told a press conference that he remembered welcoming the Karić brothers to Belarus and praised the success of Dana Astra.

OCCRP reveals that President Lukashenko’s daughter-in-law, Lilia Lukashenko, was listed in company documents in 2017 as one of the deputy directors of Dana Astra. A spokesman for the Karićs told OCCRP she no longer works there.

The chairman of the board of Dana Holdings, Vibor Mulić, denied to OCCRP that the Karićs had a privileged relationship with Lukashenko.

According to OCCRP, many of the projects “followed the same pattern: big promises and generous government support for ambitious plans that never materialise. Despite the companies’ repeated failures to deliver on commissioned projects, they keep getting contracts.”

They include the Minsk Lighthouse, an ambitious project awarded following an architectural competition in 2008. But in contrast to the futuristic design, 12 years later only high-rise cinderblock apartment buildings have been built.

Dana Astra was awarded 300 hectares of land – the most received by any company in Belarus – through a presidential decree in 2014 to develop the mixed-use Minsk World, which was supposed to include the construction of an international financial centre to attract foreign investors to Belarus. The land was worth an estimated $800mn, and Dana Astra also got tax breaks and access to city resources to build infrastructure for the development, according to OCCRP.

OCCRP reported that the condos at Minsk World are financed with “residential bonds”, namely purchases of unfinished homes in exchange for a significant, below market value discount. Many of the Minsk World bonds have been purchased by BPS-Sberbank, said OCCRP. By 2020, the subsidiary of Russian financial giant Sberbank had bought residential bonds worth $140mn from Zomex, equal to almost half of the company’s assets.

In a separate deal, Zomex received a 78-hectare plot of land worth $80mn to build residential housing at Park Chaluskincau.