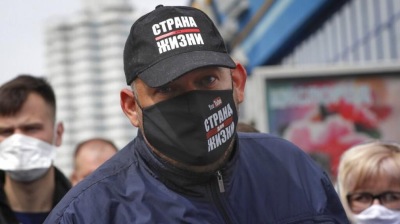 The 33 Russians mercenaries who were apprehended near Minsk on suspicion of preparing mass riots on July 29 may be connected to jailed opposition blogger and would-be presidential candidate Sergei Tikhanovsky and Nikolai Statkevich, an opposition leader who ran in the 2010 presidential race against Belarus president Alexander Lukashenko, the Investigative Committee of Belarus said to the state-controlled media organization BelTA on June 30.

The Investigative Committee had opened a number of new criminal cases against Tikhanovsky. He faces criminal charges specified by Part 3, Article 130 of the Criminal Code on suspicion of committing deliberate acts intended to instigate other social enmity, on suspicion of calling for violent and aggressive actions against law enforcement personnel. The new charges carry jail terms of up to 12 years.

Observers speculate that the charges are intended to put pressure on his wife Svetlana Tikhanovskaya, who is currently running a highly successful election campaign. Tikhanovskaya has organised large rallies in a number of regional cities in the last week, which feature prominently in her new campaign video. The sound track is the song “Change” by legendary Soviet-era singer Victor Tsoi.

Statkevich, Tikhanovsky, and other political prisoners have also been charged under Article 13 and Part 2 of Article 293 of the Criminal Code which related to preparations for mass riots.

The intelligence agencies claims to have verified links between the opposition leaders and the 33 citizens of the Russian Federation, who are employees of the Wagner private military company. They were arrested in the Belorusochka sanatorium in Minsk District on 29 July on suspicion of sedition.

Tikhanovskaya is the only remaining opposition candidate in the presidential race and hundreds came to her latest rally in Baranavichy and Haradok. Participants shouted slogans “Lukashenka, go away!” and “Believe me, we can win”.

One of the other consequences of the arrest of the mercenaries is the authorities are using it as an excuse to put more restrictions on opposition rallies. The police presence will be increased and metal and participants will be forced to go through metal detectors.

During the rally of June 30 Tatsiana Seviarynets, one of Tikhanovskaya’s campaign managers called on the other pro-state candidates in the presidential race -- Andrei Dzmitryeu, Hanna Kanapatskaya and Syarhei Cherachan -- to withdraw.

Authorities announced on the same day that Tikhanovsky’s detention has been extended until September 29.

“Friends, [Sergei’s] detention has been extended until 29 September. Unfortunately, this did not come as a surprise to us. But it didn’t knock him out. He is my hero!” Tikhanovskaya wrote on a her Facebook page.

Tikhanovsky has been behind bars since May 29, after his arrest at a picket in Hrodna. He is accused of organizing mass riots, as well as obstructing the work of the CEC and is now in pre-trial detention facility #1 awaiting trial.

Earlier the day, Belarus’ Andrei Raukou, Head of the Security Council of Belarus, spoke about the changes in the country after the meeting with Lukashenka, Belarusian media announced.

First of all, the changes will affect the control at the border, as well as the presidential election-related mass events. The opposition fears that the latter measure will be used to clamp down on the protesters who are turning out in larger numbers.

“And including the border with the Russian Federation as part of the study of the situation, tracking people who cross the state border, including the green border,” said Raukou. “These forces will be significantly strengthened”.

The changes will also affect mass events related to the election campaign. Control over access to the venues, security and inspection will be tightened.

“Because in the organizational structure of the detained people certain directions are clearly traced — snipers, bombers, IT specialists. With this in mind, a number of organizational measures on security issues will be taken,” explained Raukou.

The chairman of the Security Council described the situation as “a very unpleasant fact,” which is not confirmed by the Russian Federation. He stressed that if there was a transfer of a private military company somewhere, let alone through the territory of Belarus, there would probably be some