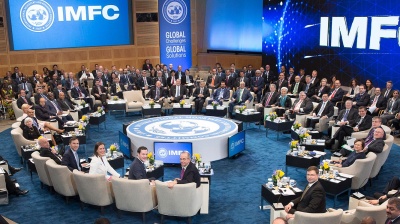 The IMF didn't even discuss excluding Belarus from its $650bn SDR handout to emerging markets. Minsk will receive $1bn with no strings attached despite the protestations of leading western countries, providing welcome relief from the harsh sanctions recently imposed on Lukashenko's regime. / wiki
By Ben Aris in Berlin August 13, 2021

The embattled regime of Belarus' President Alexander Lukashenko is due to receive the equivalent of $1bn from the International Monetary Fund (IMF) as part of its $650bn Special Drawing Rights (SDR) giveaway that is designed to help struggling economies from around the world recover faster from the coronacrisis.

The decision has already caused uproar amongst Belarus’s opposition supporters who complain the money comes with no strings attached at all and will simply prop up the cash-strapped Lukashenko regime that has been put under enormous pressure by several rounds of punitive sanctions designed to cut him off from funding.

“This is worrying. Normally SDR goes towards #Belarus’ foreign exchange reserves, which are used to pay the external debt or support the BY rouble. But there is no way to ensure that or monitor how these funds will be spent - what if on repression or supporting the regime?” Katia Gold, a fellow at CEPA and expert on Belarus, said in a tweet.

SDRs are the currency the IMF uses between its member states. Each country is assigned SDRs as part of their membership and they can be cashed for dollars, euros and yuan between member states. The IMF has made a package of SDRs available and from the middle of August will distribute them amongst emerging markets in proportion to their allocations with the fund. In Belarus’ case it is due to receive the equivalent of $1bn.

The country has been cut off from the international capital market by several rounds of sanctions and is desperate for money. Last year the population withdrew $1.9bn from banks in dollars – and $1.4bn in August alone when the mass demonstrations broke out. Belarus’ international reserve assets stood at $7.4bn on July 1, according to preliminary data from the National Bank of the Republic of Belarus (NBRB), which is less than the three months of import cover economists consider the minimum level to maintain the stability of the national currency.

Russia has become the only source of funds together with the Russia-led Eurasian Fund for Stabilisation and Development (EFSD). Russia has extended a loan of $1.5bn of which two tranches have already been paid and another is due in the first quarter of next year. But the Russian loans are only enough to stave off defaults and have left the economy dysfunctional; the budget deficit is believed to be currently running at 30% of GDP and Lukashenko has little way to finance the gap.

The SDRs can only be exchanged for actual money with other governments and it very likely western nations will refuse to cooperate, but Belarus has enough friends that it should be able to find someone to exchange the SDRs for dollars.

“Belarus — looks like the IMF will be bankrolling the Lukashenko regime after all with the USD1bn SDR allocation. Does the acronym mean Supporting Dodgy Regimes? US might seek to stall FX conversion but surely Russia will just step to provide $ swaps,” Tim Ash, senior sovereign strategist at BlueBay Asset Management, said in a tweet.

Opposition leader Svetlana Tikhanovskaya has been touring the West over the last year and recently met with US President Joe Biden and UK Prime Minister Boris Johnson, who both not only promised to support the opposition but brought some of the harshest sanctions yet on August 9, the anniversary of the disputed presidential election.

The US is the largest contributor to the IMF, which is headquartered in Washington, but the Belarusian government continues to enjoy a consensus recognition from the fund’s 190 members. And that simple majority is all that is needed for Belarus to qualify for the SDR dole out, in a decision that was reached earlier this month.

On Belarus, “as is always the case, the IMF is guided by the international community, which continues to deal with the current government in the country,” fund spokesman Gerry Rice said on August 12 in emailed comments to Bloomberg. “Given recent developments, we continue to monitor the situation closely.”

Some regimes like Venezuela and Myanmar will not be eligible for the SDR hand out as, unlike Belarus, a majority of IMF members do not recognise their governments. But other countries that will receive money include China $42bn, Russia $18bn, Iran $5bn and Ukraine $2.7bn.

Despite the outraged reaction amongst activists Bloomberg reports that the question of excluding Belarus from the handouts was not even discussed by IMF members, a person familiar with the fund’s operations told the newswire.

US  Treasury officials earlier this year said the US will refrain from offering to exchange SDRs to dollars for countries which it sanctions including Russia, China, Iran and Belarus, and will pressure allies to do the same.

Even if the US declines to provide Belarus with hard currency, the IMF has 31 other nations and institutions who have entered into voluntary trading arrangements to provide cash in exchange for SDRs, including China.

It appears that Lukashenko did not expect to receive the IMF money. A week prior he asked Putin for a billion dollars from the Eurasian Development Bank to replace the loan that he didn’t expect to receive from the fund. He said the money is needed to repay and refinance foreign debt through the beginning of 2022.

Despite Lukashenko’s increasing dependence on Putin’s support to remain in power in the face of international isolation, the Belarusian leader has continued to be a source of frustration for the Russian government.