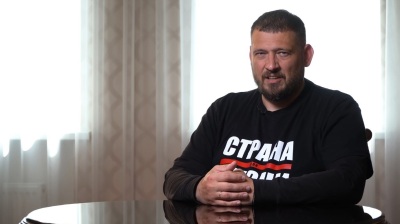 Opposition activist Sergey Tikhanovsky and husband to Svetlana Tikhanovskaya, who is widely believed to have won last year’s presidential election, was sentenced to 18 years in jail for organising mass disorder and inciting social hatred, among other charges. / wiki
By bne IntelliNews December 15, 2021

A Belarusian court sentenced Sergey Tikhanovsky to 18 years in jail along with several other top opposition figures, journalists and bloggers on December 14 as the Lukashenko regime continued its brutal repression of its enemies following last year’s disputed elections.

A popular blogger, Tikhanovsky organised street demonstrations against Belarus' President Alexander Lukashenko and put himself forward as a candidate in the August 9 elections, but was arrested the month before, triggering the first of the street protests that exploded into mass demonstrations after the vote was held.

His wife Svetlana Tikhanovskaya ran in his stead and is widely believed to have won the elections by a landslide, despite the official results handing Lukashenko a crushing victory. Tikhanovskaya fled the country a few days after the election, since when she has been tirelessly campaigning to raise support from European leaders to impose sanctions on Belarus and to try to force Lukashenko from office.

Tikhanovsky was sentenced to 18 years in jail for “organising mass disorder, inciting social hatred, impeding the activities of the Central Election Commission, and organising activities that disrupted social order.”

Footage from the closed session trial showed Tikhanovsky definitely standing with his back to the judge as the sentence was read out, reports RFE/RL. He later shouted out: "Long live Belarus!" one witness who was inside the courtroom told RFE/RL's Belarus service.

The trial result brought harsh rebukes from the international community. US Secretary of State Antony Blinken said in a statement that “politically motivated convictions are further evidence of the regime’s disregard for these international obligations as well as for the human rights and fundamental freedoms of Belarusians,” Blinken said as cited by RFE/RL.

"These sentences are part of the ongoing brutal and systematic repression of all independent voices in Belarus," Stano said the US newswire reported. "The EU strongly condemns these continued, flagrant violations of human rights and fundamental freedoms by the Minsk regime."

Tikhanovskaya also condemned the conviction of her husband, saying in a tweet: "The very existence of these people is a crime for the regime. They're repressed for wanting to live in a free Belarus. The dictator publicly takes revenge on his strongest opponents. While hiding the political prisoners in closed trials, he hopes to continue repressions in silence. But the whole world watches. We won't stop.”

Blogger Ihar Losik, who is also an RFE/RL consultant, was sentenced to 15 years. Losik was arrested even before last summer’s mass demonstrations began and has been in pre-trial detention since June 2020. In April he tried to commit suicide by slitting his wrists and has been on hunger strike twice to protest over his detention. He was initially charged with allegedly using his popular Telegram channel to "prepare to disrupt public order" ahead of the August election.

Other defendants at the trial, where they all shared a courtroom cage, were former presidential candidate Mikalay Statkevich, who received a prison sentence of 14 years; opposition activist Uladzimer Tsyhanovich, who got 15 years; activist Artsyom Sakau, who received 16 tears; and activist Dzmitry Papou, who was sentenced to 16 years.

They were convicted for variously organising mass disorder, inciting social hatred, impeding the activities of the Central Election Commission, and organising activities that disrupt social order.