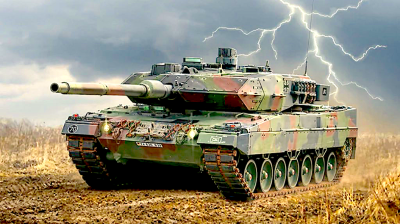 After months of prevaricating, Berlin has given the go-ahead to send one company of Leopard 2 main battle tanks to Ukraine. / bne IntelliNews
By Ben Aris in Berlin, by Wojciech Kosc in Warsaw January 24, 2023

After coming under extreme pressure from its European allies, Berlin announced it would send a company of Leopard tanks to Ukraine, in what is a significant escalation of Western help to Ukraine.

German Chancellor Olaf Scholz caved into EU peer pressure and announced “at least one company” of Leopard 2 main battle tanks, one of the most sophisticated tanks in the world, would be sent to Ukraine, he said on January 24.

Germany has been the second largest donor of military equipment to Ukraine after the US, but it has typically moved slowly and resisted sending any offensive weapons until now.

Berlin also indicated that it would allow its European Nato allies to also re-export the German-made Leopard 2 tanks to Ukraine.

The United States may also supply a "significant number" of Abrams main battle tanks, according to sources familiar with the matter, reports Politico Europe.

The decision by Germany comes after a meeting in Berlin between Defence Minister Boris Pistorius and Nato Secretary-General Jens Stoltenberg, where the Nato chief was seen to be pressing Germany to supply some tanks to break the stalemate on the battlefield in Ukraine of the last month.

Berlin was tight-lipped on the details. One company comprises 14 tanks and matches the UK’s earlier offer to send one company of its Challenger 2 main battle tank.

Military experts say that one or two companies of tanks are unlikely to turn the tide of the war, as bne IntelliNews reported this week on the significance of the addition of tanks to Kyiv’s struggle against Russia.

Poland, in particular, has called for 100 Leopards to be sent to Ukraine. Leopards are superior to Russia’s T-72 workhorse tank, which was developed in the Soviet era.

Poland would like to build a coalition of Leopard 2-equipped armies to send more than a token number of vehicles to Ukraine. “This is our common cause because it is about the security of all of Europe!” the minister added.

Germany is expected to formally approve the Polish request as soon as January 25, according to a report by Bloomberg.

Ukraine already had some 2,000 tanks at the start of the war but they were largely the T-64 model that was developed in the 1960s. Following the start of the war, the other former Warsaw pact countries sent Ukraine their Soviet vintage tanks, but these were mostly more T-64s and some T-72s. Ukraine has also captured and put to use numerous Russian T-72s.

However, none of the Soviet vintage tanks are a match for the Leopard, which thanks to its heavy frontal armour can destroy a T-72 in a head-to-head shootout.

Moreover, Russia has nothing like the US-made tank-busting Javelin missiles that can destroy a Russian tank by dropping on the roof and “popping its lid” as the shells stored in the turret explode and blow its turret off the body.

“It seems to me that the key to Germany’s reluctance to deliver tanks is what [German Chancellor Olaf] Scholz always says: that Ukraine should not lose and Russia should not win,” Minna Alander, a research fellow with the Finnish Institute of International Affairs, said in a thread on Twitter as reported by bne IntelliNews earlier.

“Instead, Ukraine should get enough support to prevail until both sides are ready for negotiations.”

That optic could be in for a change now, as the arrival of powerful Western main battle tanks on to Ukraine’s battlefield may prove a significant turning point in the conflict. Analysts see it as a switch from providing Ukraine with largely defensive weapons to prevent it from losing the war to offensive weapons that could allow it to win.