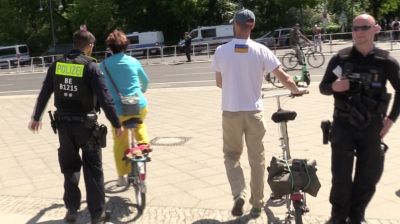 Ukrainian supporters escorted off the Tiergarten War Memorial by police
By Dominic Culverwell in Berlin May 10, 2022

The Berlin police backtracked on their initial ban regarding the display of national flags and symbols during Victory Day celebrations on May 9.

Previously, the police announced a total ban on Russian, Ukrainian and Soviet symbols from May 8 to May 9 at specific memorials in the capital amid rising tensions between pro-Ukrainian and pro-Russian groups. However, the ban was overturned for a short period: Ukrainian flags were allowed to be displayed for one hour on May 8, the Ukrainian day of remembrance; Russian and Soviet flags were allowed during the morning commemorations on May 9, the Russian day of remembrance. After these timings, the ban was reinstated.

Nevertheless, Berlin police received backlash for banning Ukrainian symbols alongside Russian and Soviet ones. In one instance, Berlin police quickly forced two Ukrainian supporters to leave the Tiergarten Soviet War Memorial after they displayed the national colours of Ukraine. Meanwhile, the Russian nationalist biker gang the ‘Night Wolves’ were photographed displaying the Russian flag at the same memorial outside the allocated time. Many took to Twitter to criticise what they deemed to be the unjust treatment of Ukrainian supporters in comparison to their Russian counterparts.

“​​This is simply insane,” Ukrainian journalist Kateryna Kruk tweeted in response to the incident. “Like honestly, Berlin doesn’t know who’s aggressor, who’s the victim and that they can’t be treated the same? What a mess”.

After German officials expressed concern in the run-up to the Victory Day celebrations, a heavy police presence was deployed. Several incidents last month suggested that there was potential for escalation between Ukrainian and Russian groups. However, the event remained relatively calm, with confrontations between pro-Russian and pro-Ukrainian groups limited to verbal exchanges.

Tensions skyrocketed last month after a pro-Russian motorcade drove through Berlin displaying Russian military flags as well as the “Z” symbol, which has become synonymous with the invasion. The “Z” and “V” symbols have since been banned in Germany.

Days later, the Soviet War Memorial in Treptow Park was vandalised with messages saying “Ukrainian blood on Russian hands” and “Death to all Russians”. Whilst in Hanover, Ukrainian protestors pelted a pro-Russian motorcade with horse manure.

Russian groups again tried to organise a motorcade in Berlin on 24 April under the guise of standing against Russophobia. But the demonstration was cancelled allegedly due to fears of retaliation from pro-Ukrainian groups. Unsurprisingly, German officials have expressed apprehension in the lead-up to Victory Day.

Responding to the first pro-Russian motorcade in Berlin, Green party member Gollaleh Ahmadi tweeted: “This is a foretaste of what will await us on 9 May. We must not tolerate warmongering fascist propaganda here in Berlin – neither today nor at any other time”.

Russian President Vladimir Putin stated in March that Russia’s war in Ukraine will end on May 9. However, this has been dismissed as Kremlin propaganda to emphasise Russia’s accusation that Ukraine is run by Nazis.