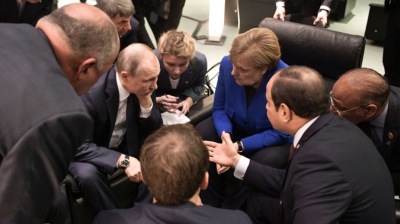 World leaders at the Libya peace summit in Berlin tried to solidify a shaky peace
By bne IntelliNews January 20, 2020

Foreign powers agreed at a summit in Berlin on January 19 to try to solidify the unstable truce in Libya between the internationally recognised government, which is backed by Turkey, and the self-styled Libyan National Army (LNA) forces of warlord Khalifa Haftar, supported by backers including Egypt and the UAE and strengthened by Russian mercenaries and African troops.

However, the meeting was overshadowed by blockades of oilfields by forces loyal to Haftar. They could wreck the country’s crude production.

Haftar attended the one-day summit in the German capital despite abandoning Moscow talks over a ceasefire last week.

Turkey has rushed troops to Tripoli, as well as Turkish-backed fighters from Syria, to help Libya’s Prime Minister Fayez al-Serraj resist Haftar’s assault from the east.

Although there has been a lull in air strikes and less fighting over the past 10 days, heavy exchanges of artillery fire could be heard from some front lines south of Tripoli late on January 20, residents said, according to Reuters.

German Chancellor Angela Merkel told reporters that the Berlin summit, attended by the main backers of the rival Libyan factions, had agreed that a tentative truce in Tripoli over the past week should be turned into a permanent ceasefire to allow a political process to take place.

A special committee comprised of five military officials from each side would monitor the truce, she said. Foreign powers active in Libya have committed themselves to uphold an existing UN arms embargo and cease shipping weapons there, she added.

“We know that we have not solved all of Libya’s problems today but we were aiming for fresh momentum,” she said.

On January 20, Libya’s NOC said the major southwestern oil fields of El Sharara and El Feel were closing after forces loyal to Haftar blockaded a pipeline. The closures will cut Libya’s oil output to 72,000 b/d from 1.2mn b/d in just a few days’ time unless the blockages are lifted, the NOC said.

The government is dependent on oil revenues to fund its budget.

UN Secretary General Antonio Guterres said he was very worried about the closure. German Foreign Minister Heiko Maas said Serraj and Haftar had “in general” agreed to solve the output blockage, without giving a time frame.