BEYOND THE BOSPHORUS: Erdogan becomes top shareholder in Turkcell 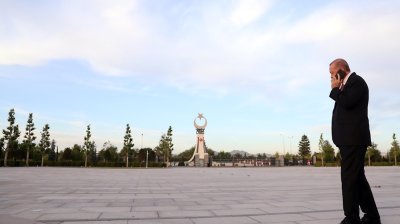 "Hey Donald, getta load of this." Erdogan's now ruling the roost at Turkcell.
By Akin Nazli in Belgrade June 18, 2020

Turkey Wealth Fund (TVF) confirmed on June 18 that it is to take over Swedish Telia’s 24.02% indirect stake in largest Turkish mobile operator Turkcell for $530mn in cash. Analysts saw the price as low.

The sovereign wealth fund will finance the deal through “state mandate and a loan from LetterOne”, Telia said.

Only $150mn will be provided by TVF, with the remainder secured in the form of an interim loan from LetterOne, which will later be cancelled out as LetterOne increases its stake. LetterOne has a one-year lock-up on Turkcell shares.

All parties agreed to forsake existing legal cases related to the telco at the international arbitration courts.

“The price is less than 50% of market cap which is low,” analysts at Norway’s Den Norske Bank (DNB) were quoted by Reuters as saying in a note.

Telia will write in a capital loss of Swedish crowns (SEK) 3bn ($322mn) from the sale.

Erik Meyersson of Sweden’s Handelsbanken questioned aspects of Telia’s involvement in Turkcell on Twitter, given that Telia is partly owned by the Swedish government.

He posed some questions: “1) How did a partly SE-state-owned co get so deeply embroiled in TR’s authoritarian decline?  2) How much was SE gov involved in Telia’s dealings w TR state re TCELL? 3) What did SE gov do to try to stop TCELL being used as an instrument of repression? 4) What were the net benefits to Swedish taxpayers of Telia’s TCELL investment? To the extent that the costs include failure to uphold human rights values abroad, what were financial gains?”

It might be said that the main problem here is that most people see the ethical side of business as some kind of exotic, romantic thing that comes along as a bonus, if it’s doable and you’re lucky—but that’s short to medium term thinking, those who overlook ethical values always lose out in the long run.

The Swedish government is not the first to think it was smart to overlook Turkish President Recep Tayyip Erdogan’s crimes against humanity and the list of those who meet the same end that it has with the Turkcell investment will only keep expanding until the last victim emerges licking their wounds.

Meyersson also shared a blog post that he wrote in 2014, entitled “Turkey’s Economic Miracle and its Swedish Cheerleaders”.

Despite the sale, made at a 54% discount according to Bloomberg’s calculations, Turkcell’s share price (TCELL/TKC) rose 10% d/d after the deal was announced. Its market value thus reached Turkish lira (TRY) 32.bn ($4.7bn), meaning the 24.02% stake had a worth of $1.1bn.

Zafer Sonmez, the general manager of TVF—chaired by Erdogan since he fired the board—reminded the market that Turkcell was valued at $17bn when it went public on the Borsa Istanbul and New York Stock Exchange in 2000.

VTB Capital is one observer that does not expect a significant increase in Turkcell’s dividend flows. Ivan Kim of the Russian investment bank made that clear in a note entitled “Tectonic ownership overhaul”.

“Still, government control over the asset with limited economic exposure creates a risk of hefty price tags in spectrum auctions or participation in socially important state projects,” he added.

VTB sees LetterOne as having the option of maintaining the status quo or exiting over the long term. The status quo will probably prevail in the short term, in its view, as LetterOne has just increased its stake.

Turkcell’s shareholder structure is a great labyrinthine puzzle. Solving who really gets out alive is no mean feat.

Prior to the deal, Telia Sonera was the largest shareholder in Turkcell with its 24.02% indirect stake while Turkish mogul Mehmet Emin Karamehmet’s Cukurova Holding held a 13.8% stake and Russian tycoon Mikhail Fridman’s LetterOne had 13.2%.

There is no available financial information on the deals between Cukurova, LetterOne and TVF.

So Karamehmet has $1.6bn worth of debt owed to Ziraat, but his Turkcell stake only amounts to 13.8% There is no further information available on what is going on here.

At the end of the interlaced deals, which the parties want completed by September, Turkcell Holding, which has a 51% stake in Turkcell, will be abolished.

TVF will have a direct Turkcell stake amounting to 26.2%, of which 15% will be privileged, while LetterOne will directly control 24.8% and the remaining 49% will remain listed.

LetterOne will issue notes to TVF and some deals will happen during the process as detailed in TVF’s press release.

At the end of the deal, TVF will appoint five of the nine board members thanks to its privileged shares and Erdogan will be the de facto official boss of Turkcell. Erdogan’s partner will be Fridman.

In 2005, LetterOne bought shares in Turkcell and its shareholders entered into a dispute, which continued until 2017.

From 2011 to 2015, Turkcell could not distribute any dividends due to the shareholder dispute, while the Capital Markets Board of Turkey (SPK), also sometimes known back then as “Prime Minister Erdogan”, moved to appoint board members to Turkcell to solve the deadlock.

The Turkcell investment is the first made by Turkey’s wealth fund since it gained the power to take over private companies.

TVF has updated its website and released an annual report (or rather, something approaching an annual report for 2018). It has a BB-/Stable rating from Fitch Ratings in line with the sovereign rating. Certainly in this case, all eyes should not shift from the sovereign. A “sultan rating” might follow.

COMMENT: Five reasons why Zelenskiy is failing in Ukraine: Zelenskiy faces a political future that is no laughing matter

Volodymyr Zelenskiy's presidency seems to have gone off the tracks but no one is quite sure what is going on. Is he a puppet or just out of his depth? Melinda Haring of the Eurasia Center at the Atlantic Council offers five theories.