BEYOND THE BOSPORUS: How the Emir of Qatar’s mum won the Istanbul land lottery and other tales of wonder 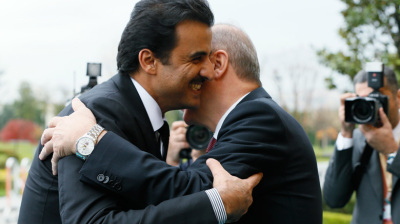 Erdogan (right) greeting the Emir of Qatar.
By Akin Nazli in Belgrade July 20, 2020

A 44,000-square metre plot of land located alongside the controversial Canal Istanbul mega infrastructure project and owned by Qatari Emir Tamim bin Hamad al-Thani’s mother, Sheikha Moza bint Nasser, has been rezoned into a tourism and trade area, according to Turkish daily Sozcu.

In December, the newspaper reported that the sheikh’s mother had bought the land in question after in November 2018 establishing a company in Turkey.

The worth of the land is now set to rise by at least fivefold following the release of the zoning plan that transforms the potential for its use, the daily also noted.

Do we hear a gasp or two among readers? Well, you can’t expect us to tell a “dog bites man” story here, no matter the tingling sensation, but let’s just mention that Turkish President Recep Tayyip Erdogan’s son-in-law and finance minister, Berat Albayrak (below), surely cannot be behind Sheikha Mozah’s successful real estate investment. Not a chance. A most impudent notion.

Albayrak’s father reportedly bought his land back in 2003 while Berat Albayrak purchased his in 2012 after father-in-law Erdogan announced Canal Istanbul as his “crazy project” (“crazy” as in “crazy wow” rather than “nuts” though environmentalists, among others, contend the project is actually “crazy sad”).

In February, Albayrak blocked, via court rulings, access to an online news report on his acquisition of land by the project. However, a new wave of news reports have broken following the release of the latest master plan for the locality in question.

Also taking column inches is the sorry fate of main opposition Republican People’s Party (CHP) leader Kemal Kilicdaroglu (below) who, according to a Turkish court ruling, must pay TRY556,000 in compensation to Erdogan and some of his relatives after publicising documents that he claimed showed the president’s family hid money offshore in a company based on the Isle of Man.

Erdogan, meanwhile, using another obtained court ruling, has been busy seizing FX worth TRY565mn from the Istanbul Municipality held at government-run lender Vakifbank to pay a debt owed by the former administration of the municipality to a contractor, MET-GUN Insaat.

The money was borrowed abroad by CHP mayor Ekrem Imamoglu for metro construction. MET-GUN was a leading contractor for the municipality when it was controlled by Erdogan’s Justice and Development Party (AKP).

It is rather notable that while Erdogan seized Imamoglu’s hard currency, he paid the contractor in lira.

Vakifbank said on July 16 that it would sue Imamoglu for statements he had made against it. Such seizures result from court rulings and lenders must apply them, the bank added.

The banking law in Turkey has a particular article with broad scope that came into force after the banking industry in the country collapsed following the Turkish crisis of 2001—under it, pretty much saying anything negative about the banks is a crime.

Imamoglu’s close friend and Fox Turkey anchor-man, Fatih Portakal (below), is also in trouble under the banking law after he implied in a tweet that Erdogan might seize bank deposits.

Last but not least, there’s the tale of one Ahmet Sariduman (looking quite pleased with himself, below), who fired his good self from the position of general manager of Ankara Municipality’s subsidised bread production company, of which he is also board chairman, and paid himself TRY36,000 in severance for the dismissal. Ankara Mayor Mansur Yavas revealed Sariduman’s fancy footwork on July 17 at a long city council session on corruption.

P.S. If you've not yet had your fill of dastardly deeds and bizarre contortions, catch up with the Wushu Federation story from Ahval.

ISTANBUL BLOG: Now you see it, now you don’t
Fugitive businessman promises to recover $1bn stolen from Moldovan banks
ISTANBUL BLOG: No end to the jitters for Turkish markets