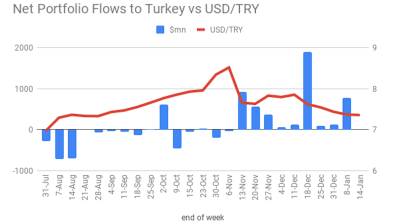 Portfolio inflows into Turkey amounted to $775mn in the first week of 2021, central bank data showed on January 14.

On the global front, on January 14, Fed chairman Jerome Powell and US President-elect Joe Biden appeared to promise that there will be no let-up in the printing of dollars.

Meanwhile, talk of a “need for a correction” in financial asset prices is spreading among finance industry pundits. The US administration seems determined to further inflate the self-evident bubbles but even global finance players appear afraid that as things stand we may be heading for a bang, not a whimper. It seems that a managed burst will be attempted in the coming period. Estimating the exact timing is not possible, but Biden’s stimulus package talks in Congress during February may present a suitable opportunity.

On the Turkey front, also on January 14, Rifat Hisarciklioglu, head of the Union of Chambers and Commodity Exchanges of Turkey (TOBB), issued a written statement to criticise the country’s high interest rates.

The government-run banks are still holding cheap loan campaigns for small merchants but it looks like that is not enough for Turkey’s cheap loan addict business folk.

Hisarciklioglu is a passionate Erdoganist, while the TOBB is the business group most influential with Turkish President Recep Tayyip Erdogan.

Although the Erdogan administration’s market-friendly U-turn—ditching the finance minister and central bank governor during a lively weekend—took place in early November after the president sent out the dubious message that he was shocked to find the country’s FX reserves had been sent up in smoke in an ill-fated attempt at defending the Turkish lira (some might argue he was thus pleading negligence, but let’s have that debate again another day), the monetary tightening process under way in Turkey actually began in July.

Hisarciklioglu’s statement amounts to the first public reaction to the tightening and the agitation of the TOBB might become even plainer if it hosts Erdogan at an event or two in coming days.

Erdogan, as we know, is also “against” hiked interest rates. Some time might once more be bought by demonising the banks, but the discord among the business bosses will only grow from here.

A sharp U-turn in interest rate policy on the instruction of the Ankara palace would be no surprise in coming months.

As it happens, the global finance industry does not actually believe in any Turkish commitment to long-term tightening despite the calls for lira appreciation.

“We’ve seen this so many times before. No one believes this is a long-lasting story now. There’s no one left to have any faith that Erdogan has learned. We’re all assuming this goes on for six months and Erdogan goes back to calling for interest rate cuts,” Charles Robertson, chief economist at Renaissance Capital, told the Wall Street Journal on January 7.

Some investors may be buying into a brief upswing for Turkey while capital pours into emerging markets on optimism that an end to the coronavirus (COVID-19) pandemic is in sight, according to Robertson.

The big question is thus how long Erdogan’s current ‘hot money party’ will last for. Robertson’s “six months”, starting from November, point to it concluding in May. It is at that point that Turkey’s official inflation index is expected to start trending downwards.

But can Erdogan hold on until May? While he struggles with sore temptation compounded with a rippling desperation, it would seem that global finance could even ignore a nuclear explosion in downtown Istanbul. Certainly by May, it will not be hard to list some reasons for a sharp exit by foreign players.

Moved to write about hunger

Your correspondent, on January 15, did a medium-strength double take on finding that even Reuters had been moved to write about hunger in Turkey.

As a wise fella once said to me, the reason a dog has so many market friends is that he wags his tail instead of his tongue. The big news agencies being what they are, they have to continue to take Turkey’s discredited official macro data ever so seriously, so Reuters dutifully trots out the government line that Turkey’s annual inflation rate stands at below 14.6% (in reality it’s something like 36%, according to some Istanbul academics), while the unemployment rate is moderating and the Turks have the fastest growing economy in the world.

Not next up is a report from Reuters explaining how the so-called fastest growing economy in the world is creating such hunger. Pointing to the sharp jump in Turkey’s labour productivity that the official data implies may help.

Given that the Turks are all too aware of their booming inflation and the simply dreadful economic conditions in their country, even the finance industry cannot believe in the ‘de-goldollarisation’ story but they have to talk about it.

Since November 6, $4.97bn has flowed into Turkish markets. Note that the biggest weekly inflow, at $1.9bn, was seen in the week ending December 18, but that $1.59bn went into repo papers; it underlines how the inflows have a short-term focus.

The BIST-100 benchmark index of Borsa Istanbul on December 30 passed 200 on a USD basis for the first time since June 2018.

If your brokerage or investment advisor shows you a chart such as this and sells the story that “Borsa Istanbul is still far away from its historical highs”, give them the boot. Ever since 2013, Turkey has been in freefall in all aspects. That’s the year of course that the FED could not negotiate the “taper tantrum”, causing it to fall into new expansionary cycles, first with Donald Trump and later on blown by the coronavirus.

Under normal conditions, identifying stocks that have lagged the rally would be meaningful but the conditions are currently far from normal.

Ford Otosan (FROTO) is one company booming into 2021.

On January 14, the flash crash stock, Pegasus Airlines (PGSUS), had another flash crash.

Since January 4, the central bank has provided daily data on its FX-TRY swaps with local lenders, but it still does not provide the lira costs in swap transactions.

It is now easier to track inflows via local banks’ FX-TRY transactions on the London swap market but the costs of the central bank’s swap transactions with local lenders are important too as the national lender still provides more extensive Turkish lira funding via swaps.

In the chart below, shared on January 13 by @e507, Haluk Burumcekci of Burumcekci Consulting calculates the central bank’s weighted average funding rate at 15.54%, when swaps are included, as of January 12, versus 17% at the main policy rate (one-week repo) when swaps are ignored.

Calculations suggest that around $13bn arrived in Turkey via banks’ swaps in London from the end of October to January 8, including about $7bn in November, $5bn in December and $1bn in the first week of 2021.

There are calls to increase the banks’ swap limits (for transactions in which they provide USD and receive TRY at spot) but the government has not responded to those calls as yet due to insufficient central bank reserves.

There is also talk of rebuilding the reserves in finance media. Bloomberg reported on January 13 that the central bank’s FX sales to state-run natural gas importer Botas had fallen to $167mn in November and December, down from an average $958mn for the same period in the previous five years.

If the central bank saves $2bn each month via its rediscount export credits and Botas transactions, it would recover the $139bn in reserves it burnt through in defending the lira in around 70 months.

In less than 25 months, its net reserves excluding swaps would turn positive.

According to Burumcekci, the central bank’s net FX purchases in rediscount export credits and Botas transactions amounted to $96.5bn in the 12 years since 2009.

The government-run banks’ net FX deficit, meanwhile, has declined by around $5bn since November, although this does not mean Turkey is ready for an upcoming hot money outflow cycle.

The previous $5bn decline in the net FX deficit of these banks in August was due to FX-denominated domestic government bond purchases, but the finance media reports it as a $10bn recovery. But hey, it sounds more “positive”.

ISTANBUL BLOG: Get ready for the official figures