BEYOND THE BOSPORUS: Lira in sharpest weekly advance since 1994 as “market pursues volatility” 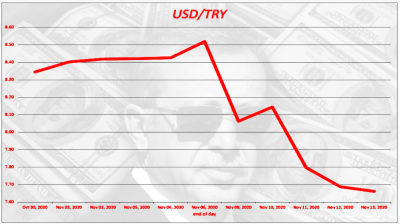 The Turkish lira (TRY) was set for its best week since 2001, Reuters noted on November 13 in its “Emerging Markets” wrap.

However, data from Investing.com shows (chart below) that the weekly advance of the lira at market close on the day surpassed the 2001 performance. It was registered as the sharpest weekly return seen since 1994.

The “1994” process ended with the “2001” Turkish economic crisis that brought a political reset while the global crisis that started more than a decade ago and the “2018” crisis have not yet reached their conclusion.

The next important juncture for “2020” arrives on November 19 when the Turkish central bank has a scheduled rate-setting meeting.

Everyone is talking about the lira’s new popularity and everyone has an idea of what the rates decision should be. The range of thought appears to start from 150bp and reach 700bp. The median expectation in the Reuters poll is 475bp.

Meanwhile, some of the vultures seem set to move on rather than take the November 19 risk, particularly having shot to the moon with Turkish equities.

Option contracts sold on November 13 now cover the November 19 rate-setting meeting time of 14:00 since Turkey does not comply with the European daylight-saving time shift, the media outlet also noted.

It’s a pity but the decision makers in Turkey either have no idea or do not care about the problems that currency volatility brings.