BEYOND THE BOSPORUS: Things are getting coarser on the borsa 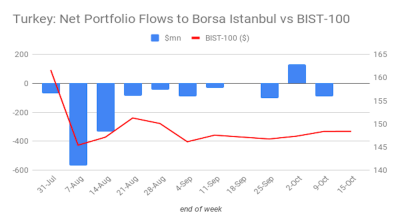 Following the surprising ‘no-hike rate hike’ brought in by the central bank on September 24, “positive” headlines and comments were generated around Turkish markets.

However, a clear direction is not as yet visible in asset prices and portfolio flows.

The lack of direction and clarity is seen in domestic government bonds too. Foreign players bought a net $490mn two weeks ago but sold $350mn in the following week.

On some days, not a single transaction occurs in benchmark domestic government bonds. The market has been systematically killed by the government since November 2018.

Despite the pumping of new “positivity” into Turkish market sentiment and visible interventions by the “native and national FX teams” that work at Turkey's state banks round the clock, the USD/TRY pair is still pushing the 7.95-level, threatening to break through the latest record low set last week.

On October 22, the central bank will hold a rate-setting meeting. Currently, the weighted average cost of funding is above 12% and the one-week swap rate stands at 11.75%, the same rate as official annual inflation.

The central bank is expected to hike its main policy rate, which currently stands at 10.25%.

However, a 200bp hike in headline rate would again mean a ‘no-hike rate hike’. It could provide just a little short-term relief with the help of the “native and national FX teams”. Some foreign players, who are not aware that Turkey is not the same Turkey as it was in 2018, may bring some portfolio inflows as they did two weeks ago.

In any case, a rate hike is not going to solve Turkey’s fundamental problems, which include a huge short FX position in the central bank reserves among many other difficulties.

Annual inflation, for instance, may be given as just below 12%. But no serious Turk believes that it is in reality below 30%.

For some short-term relief, a hike bigger than 200bp in the main policy rate may whet appetites. It could also be sold as a policy simplification since most market pundits prefer to ignore how the central bank provides bigger funding via USD-TRY swaps.

In dealing with Turkey’s fundamental financial problems, a real policy simplification is absolutely impossible since the central bank’s FX reserves are at around minus $50bn when the USD swaps with local banks are excluded.

The central bank simply cannot stop swapping USD from banks in exchange for providing them with lira funding.

Anyway, that’s enough about the ongoing collapse of the country—30% of the population (among them government officials, opposition party figures, journalists and business people) don’t seem to give a hoot, or realise that they should give a hoot, in any case!—so on with crunching some real information.

The second act of the natural gas play had higher volumes. Turkish officials may have thought to provide market pundits with the opportunity of evaluating it.

First the Erdogan administration theatrically announced ‘Lo and behold! We’ve found a big stash of natural gas. What fortuitous timing dear fellow!’ and secondly they upped the suspense by burning ears with the tantalising behind the scenes disclosure that it’s twice, thrice, fourfold (well, Turkey’s executive president is yet to rip back the curtain on the exact upward revision of the assessed Black Sea volume as that soap opera delight has been pencilled in for aboard a drill ship on October 18) what they originally thought it was. There’s no sign of an independent verifier being asked to dive down to take a look for himself, but in the meantime the big gas play has provided some bold hit-and-run opportunities in petrochemical producer Petkim (PETKM), Aygaz (AYGAZ), refiner Tupras (TUPRS), Akenerji (AKENR), Odas Enerji (ODAS) and Zorlu Enerji (ZOREN).

The timing is really important here as the electricity and petroleum stocks jump wildly when Turkish President Recep Tayyip Erdogan declares to all and sundry something along the lines of ‘Take my word for it, boyo, this is a big one’—and then they fall rather wildly as certain dull realities set in such as ‘Has anybody worked out whether it’s really worth the engineering cost of getting it out of the ground?’

An upcoming opportunity for investors might also be seen in the rate-setting meeting next week. Last time around before the monetary policy committee assembled, banking stocks moved up starting from early in the week prior to their meeting.

However, the moves seen in the banking stocks were not as sharp and high as those seen in the electricity stocks due to deeper trading boards.

For those wanting a punt on the lira, efforts were under way to give the currency a shot in the arm on October 14, but the arm seemed rather flaccid. The USD/TRY rate could only be pushed into the 7.89s and then it flopped back towards 7.95 and was trading in the 7.93s as October 17 got under way.

BEYOND THE BOSPORUS: The individual called Albayrak rules out stricter capital controls

BEYOND THE BOSPORUS: The individual called Albayrak rules out stricter capital controls
BEYOND THE BOSPORUS: Erdogan goes back to his ‘goofy movie’ routine as his central bankers hold rates
ISTANBUL BLOG: Market makers cranking the “positive headlines” machine ahead of expected rate hike