BEYOND THE BOSPORUS: What did he just say? “Interest is reason, inflation is result” 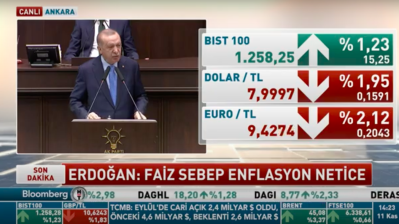 Erdogan. Feeling just a little pressure to get his house in order as Biden lurches towards Ankara?
By Akin Nazli in Belgrade November 12, 2020

Turkey has become an even weirder place (Yes, Turks are also still surprised when the country shows it is capable of getting even weirder).

On November 11, Turkish President Recep Tayyip Erdogan addressed the parliamentary group of his ruling Justice and Development Party (AKP). You may suppose that a president addressing a parliamentary group sounds a bit weird in itself, but please get yourself ready for much weirder things than that. However, before we take a real dive into the world of the weird, let’s consider that Erdogan started off by providing us with some tangible information.

Erdogan loves it when the money starts rolling in. He veritably yells it from the rooftops and sells cheap FX while the going is good. He has only imposed light capital controls on his banks and citizens so far.

He may look like he has lost the plot in a very primitive fashion, but his instincts are strong and be sure, he knows with whom he can and cannot mess.

Erdogan’s speech, as per usual, amounted to a bunch of inconsistencies. The dear leader said Turkey would promote growth and job creation while stabilising prices.

Market-maker media outlets cherry-picked his address and its market impacts to:

-        “Turkey determined to bring down risk and increase returns for investors.”

-        “Policymakers will be in close contact with investors; Turkey will organise meetings with international investors.”

-        “It’s the central bank’s job to determine policies that will achieve price stability; In that respect, I support every step that they will take.”

-    “Turkey's Erdogan declares new economic growth strategy, lira surges.” (If you are aware that promoting growth brings on inflation, go and play somewhere else. This is a party for Erdoganomic fools.)

“Markets absolutely loving Erdogan’s U turn this morning - saying he wants to meet investors, supports the CBRT [central bank] and Turkey is willing to take a bitter pill to turn the economy around. This is a Maggie T style U turn,” Timothy Ash of Bluebay Asset Management wrote in a note to investors.

Then, Bloomberg published a correction:

“Too good to be true... a zebra never changes its spots,” wrote Ash, following up.

“There's been a sudden volte face in the lira this week and even a change in the big figure back <8 as mkts have interpreted a change in personnel and some of Weirdogan's more gnomic utterances as presaging a more conventional monetary policy although I'm not sure I see the evidence myself. He's bluffed us before and expressing 'full support for central bank policies' is sort of meaningless, if you tell the CBT what those policies are and in the same breath you state 'INTEREST IS REASON, INFLATION IS THE RESULT' then I'm afraid those of us who watched him devastate the lira for the last decade are going to remain sceptical. Zebras don't change their stripes and blind squirrels eat a lot of flies,” Julian Rimmer of Investec wrote in a note to investors.

Nevertheless, despite some news story corrections, the spiel for the most part in the finance industry and media was that Erdogan’s speech was extremely positive.

Ahead of talking some chewy talk about “attracting long-term investments” (if you can find someone who can estimate what will happen tomorrow in Turkey, worship that person), the lira vultures only wonder whether Erdogan will hike his main policy rate.

Your correspondent personally listened a few times to the part of Erdogan’s address that referred to inflation and interest rates but, though Turkish is my native language, I could not understand what he was talking about.

And this is the most possible direct translation: “We’ve to create more jobs for our people. The road to sustainable strong growth and job creation passes through price stability, in other words, taking inflation under control.

“The necessity of keeping interest rates at least at the level of inflation makes our fight difficult in this field [which field? The growth field or the inflation field?]. I’m repeating what I always say, let’s never forget this: Interest rate is the cause, inflation is the result [!] and we’ll succeed in this. Inshallah, we’ll pull inflation lower [lower = “it is already low”, ahem], clearing the hurdle here. Therefore, we’re determined to decrease inflation to single digits as soon as possible, then to gradually move towards our medium-term targets.”

Okay, let’s assume the latest reference to Erdogan’s unique inflation/interest rate argument is for the domestic audience and Erdogan is really convinced that in the end the policy rate should at least be equal to the inflation rate, though that still suggests a real return of zero.

Then we note that official inflation (and believe you me or any Turk you meet on the street, it is only "official inflation") has stayed more or less constant at just below 12% in the past few months and Erdogan is signalling the release of single-digit official inflation soon. Well, then we have to note that his administration’s latest inflation figure won’t arrive until December 3—and that’s obviously later than the next rate-setting meeting, due on November 19.

The main policy rate, which is not actually used in funding by the central bank, stands at 10.25%. The active policy rate, excluding funding via USD-TRY swaps that have a bigger share in the funding mix, was at 14.29% as of November 10.

So, it’s down to you. Use your imagination to match up the figures in this puzzle. Don’t worry, all the pundits are at it.

For instance, Erdogan may hike the policy rate on November 19 by 175bp to 12%. That could be sold by the pundits who have already bought into Turkey risk as “positive”. Then the feature film script writers can take over as we dig into which funding channel or interest rate Erdogan will actually use…

It’s all plenty strange, but what’s weirder is that Turkey’s irrational monetary policy is actually its least important trouble right this moment, given the quiet panic that has been unleashed in the palace with the awakening by US voters of “Sleepy” Joe Biden. That’s right, proper presidential material Biden, who has even previously talked about emboldening opposition politicians in Turkey to take on and defeat Erdogan, is getting ready to move into the White House come January 20. Will anyone in the palace sleep the night before? Also, Turkey’s coronavirus (COVID-19) outbreak is booming to levels that should chill you to the bone… but who talks about that?

“Foreign investors… are desperate to buy Turkish assets - they just need Erdogan to reduce the anti-market rhetoric a bit and the CBRT get and orthodox fix,” according to Ash.

Let’s see. The job here is to watch whether desperate housewives find happiness this time around with the husband whose lifelong suffering from a lack of satisfaction is getting worse as he gets older.

By the way, that swap limit relaxations story that came through this morning. That’s a troll. Meaning the swap in which Turkish banks give USD to London at spot and, in exchange, take Turkish lira (TRY) from the London crowd. Thus, they will not provide more TRY to London that could be used in buying Turkish assets but they will indeed pull back TRY from the offshore market.