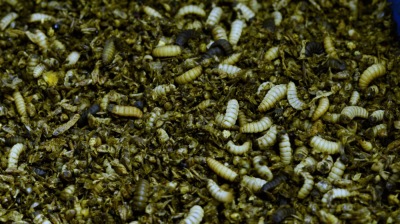 The Black Soldier Fly can eat several times its own body weight a day, processing waste that prevents it rotting and emitting methane, one of the most pernicious of the Green House Gases. Bugs are becoming big business. / wiki
By Ben Aris in London September 13, 2021

Bugs can become big business. That is what Entoprotech, an Israeli biotech start-up that uses the black soldier fly (BSF) to process organic waste, is betting on. It has announced a $2mn fundraise from Granot, Israel’s biggest agricultural cooperative and feed producer at the start of  the first fund raising round. The flies eat waste and stop it turning into methane, one the most pernicious of the greenhouse gases, before getting turned into animal feed themselves.

Alongside the investment, the companies have agreed to co-finance the formation of a “waste2protein” facility, with the construction of further facilities in the Middle East and Africa under discussion.

“We are excited to begin our work together and believe that, with Granot’s support, we can expand both our operational and research and development capabilities to create new valuable applications and ultimately increase the positive impact of the black soldier fly”, explained Sasha Babitsky, Entoprotech CEO, which has a big facility in the Russian city of Penza.

The announcement comes in the midst of rapidly rising consumer and investor concerns over the need for sustainable technology that protects and improves the environment, social and governance (ESG) metrics. Accelerated by the pandemic, this shift has resulted in investors and asset managers viewing climate risk as investment risk, accelerating the transfer of capital into 'green’ firms and ventures.

One in every three dollars - 33% of total US assets under management (AUM) – is now invested in line with ESG strategies. According to The Forum for Sustainable and Responsible Investment, socially responsible investing (SRI), ESG, and impact investing assets swelled from $3 trillion in 2010 to $12 trillion in 2018 to $17.1 trillion by the start of 2020. The trend is mirrored in Europe, where investors are moving their assets into ESG funds at a rate of 6-8% per year.

The insect sector represents one particularly exciting niche amongst ESG investment opportunities, with many firms betting on insects as the solution to our sustainability issues – whether innovators envision insects for human consumption, as feed to farm animals, or reaching their medicinal potential.

In 2021, Better Origin took home $3mn in February, while the UK government put £10mn into a multi-party project involving Entocycle, Betabugs alongside Durham and Warwick universities. Granot’s investment in Entoprotech is more of the same: green money flowing into the insect sector.

Entoprotech centres its business around the unique Black Soldier Fly. A voracious eater of anything organic, this highly-evolved insect is capable of processing multiple times its body weight in organic waste each day. This quality is hugely valuable in the fight to reduce global food waste – one of the world’s largest sources of methane, a gas with a warming impact 84 times that of CO2. By partnering with companies to process their waste, Entoprotech enables the private sector to step up climate efforts in a clean, cost-effective way.

The company is also driving sustainability efforts within agriculture, employing a circular business model to recycle flies into sustainable animal feed and fishmeal. This feed is rich in protein and amino acids and provides a climate friendly alternative to more harmful ingredients found in traditional feed, such as soy and fishmeal. As part of the deal the companies will build a new production facility in Israel as well as assessing more in the Middle East and Africa at a later stage. The pilot production facility in Penza can process 15 tonnes of organic waste each day and provides waste management services to several food multinationals.

Granot is one of the largest agricultural cooperatives in Israel and oversees 20 factories and businesses owned by 43 kibbutzim in the country’s coastal and central region, between Tel Aviv and Haifa. Since its founding in 1940, the company has played a vital role in boosting Israeli agriculture by uniting member farms to reduce costs through an economy of scale, as well as finance promising developmental projects, the company said in a press release.

Alongside its bread-and-butter products, Entoprotech is also researching a range of higher value-added products that could prove revolutionary for both the pharmaceutical and cosmetic industries.

Based in the R&D haven of Israel, Entoprotech is collaborating with leading universities and research centres to uncover the hidden potential of the BSF – namely its anti-inflammatory and antibacterial properties and its ability to break down biofilms, which could provide a solution to a tricky, long standing medical challenges.

The funds raised will be used to support Entoprotech’s R&D and business development plans over the next 12 months, with the company planning to work with local partners to build new facilities, and currently in negotiations with companies from the UAE, Canada, the USA, Mexico and Russia.

Looking ahead, this investment represents the first stage of a larger $30mn series A round planned for Q4 2022.

Naum Babaev, the serial entrepreneur behind Damate Group and founder and major shareholder at Entoprotech, says Granot’s investment fits into the wider vision of Entoprotech.

“Since Entoprotech’s inception, we have been on a mission to not only build a valuable business, but one that provides tangible solutions to the problems facing our planet, namely, climate change and a lack of sustainable waste management solutions,” says Babaev. “We know the importance of the work we do, but it is incredibly pleasing to have an investor like Granot buy into our long-term vision and see the potential in our cutting-edge solutions.”

The insect industry, despite being a relatively niche sector, has huge investment potential given the solutions it provides to several significant and pressing environmental issues.

Investments into insect start-ups are not only beneficial to companies within the sector, but to society more generally, as they enable young companies to scale enough to deliver a real environmental impact. This new funding and partnership with Granot enables Entoprotech to scale up and explore the potential of the black soldier fly more fully.

Investors should expect plenty of cash to flow into this sector in years to come, as the concept moves from its niche into the mainstream.

AmonRa wants to raise funds to finance its expansion in Romania and in other Southeast European countries.

COP finished two days late on November 20 without any new agreements on climate change targets or emissions reductions, although a deal was hammered out to set up an as yet uncosted loss and damage fund.

bneGREEN: Energy efficiency investment turns the corner in 2022, but more is needed
4 days ago
bneGREEN: EU energy ministers agree to speed up permitting and deployment of renewables temporarily
8 days ago
bneGREEN: ING: Euro sustainable bond supply set to stagnate in 2023
13 days ago
Bulgarian PV equipment company AmonRa Energy to hold IPO
15 days ago
bneGREEN: Climate paralysis at COP27 as no progress made on 1.5 degrees
16 days ago