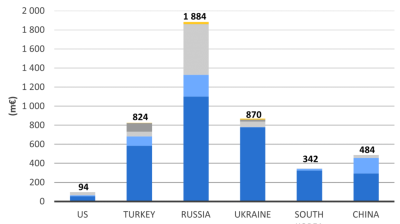 Estimate of CBAM fees in 2036. Selected countries and industries / Sandbag
By Richard Lockhart in Edinburgh September 5, 2021

The EU’s Carbon Border Adjustment Mechanism was unveiled in July with the express aim of preventing carbon leakage and apply a price to the CO2 embedded in a variety of industrial goods exported into the EU.

Two major industrial areas it will target are chemical fertilisers and electricity, with Russia, Turkey and Ukraine being major exporters into the EU.

The EU is framing the scheme as a way to reduce emissions, especially carbon leakage, and to meet the climate change targets of the 2016 Paris Agreement.

“If there is a serious risk of carbon leakage, if we take the measures to comply with [the 2016 Paris Agreement on climate change] and others don’t, and it leads to a disadvantage to our industries, [the EU] will have no hesitation whatsoever to introduce a carbon border adjustment mechanism,” said Frans Timmermans, the EU’s Executive Vice-President for the European Green Deal.

More technically, the CBAM aims to protect industrial activity in the EU from imports from other countries with lower emissions regimes by raising the costs of those imports by imposing a carbon price based on the existing EU ETS system.

It also aims to reduce the incentive to move industrial activity, and therefore CO2 production, to countries outside the EU by reducing the emissions-related cost savings on offer by such a move.

How does it work?

The CBAM fees will be calculated according to the carbon intensity of the product, the volumes of exports into the EU, and most importantly, the price of allowances on the EU ETS. This means that the prices will effectively mirror the current ETS.

However, the biggest change is that the current free allowances granted by the ETS to many dirty industries such as steel, chemicals and power will gradually be withdrawn over a 10-year period from 2026, meaning that these exporters into the EU in these sectors industries will gradually become more and more exposed to the carbon price.

For the chemicals sector, energy-intensive nitrogen-based fertilisers are most vulnerable to the CBAM, ICIS noted recently.

This contrasts with organic chemicals, which for the time being are “not targeted (by the EU) due to technical limitations.”

The embedded emissions organic chemicals exported into the EU from third countries such as Russia and Turkey are not yet clearly defined, and the Commission said that data and analysis are required to target the current EU ETS allocations to these materials.

However, as the CBAM system is set to gradually replace the EU ETS over a 10-year period from 2026, it cannot be ruled out that organic chemicals will also be brought into the scheme.

Russia is particularly vulnerable, as it provided 31% of the 5.4bn tonnes of fertiliser exported to the EU in 2018-19, which themselves account for 29.5% of EU consumption, according to the EBRD’s Round Table on Climate Change and Sustainable Transition.

The EU’s other import sources are Egypt, Belarus, Algeria and Morocco, which provide 7-9% of such imports each.

The CBAM would target the emissions produced during the manufacturing of ammonia and nitric acid, which produce the most CO2 and NO2.

Russia and Ukraine’s power exports are also vulnerable, especially as they generate power that is dirtier than more carbon-intensive than the EU average.

Russia mainly exports to Finland, while Ukraine exports to Hungary and Romania.

Russia’s Inter RAO exported 2.6 GWh to Finland in 2020, and 3.1 GWh to Lithuania, although this was unusually low because of the coronavirus (COVID-19) pandemic reducing import demand in those countries by 62% and 50% respectively.

The company said in its recent annual report that it fully anticipated having to pay a carbon price in future because of the CBAM, but has not been able to estimate any costs.

Other Russian power generators are vulnerable, with Inter RAO, OGK-2, TGK-1, Mosenergo, Enel Russia and Unipro all facing a 16% drop in EBITDA if the new tax is levied, worth RUB187bn ($2.6bn) per year, according to VTB Capital (VTBC).

Russia is so worried about the costs of the CBAM that Rosneft CEO Igor Sechin has called on the Kremlin to ensure that the EU acknowledges Russia’s own CO2 emissions quota system when calculating how much carbon tax Russian exporters must pay on their supplies to the bloc.

Russia is introducing its own, voluntary carbon trading system, partly in response to the EU’s decision to apply a carbon tax to imports starting in 2026.

Turkey, meanwhile, exported an average of 3 GWh per year of electricity into the EU between 2017 and 2019, according to the EBRD’s Round Table on Climate Change and Sustainable Transition.

In Russia, decarbonisation options currently vary greatly and can be as cheap as $2/tonne of CO2 or as high as $40-150/tCO2 (in the case of outright CCS installation), warned VTB in a recent research note.

Depending on how ambitious the future CO2 targets in Russia are, we believe an impactful CO2 price in Russia is unlikely to emerge until 2030, and would settle at some $25/t by the end of the decade.

At a such price, on average 140% of Russian utilities' EBITDA would be at risk, depending on the ability of the generators to pass through the additional costs to end-consumers.

However, the impact of the CBAM on chemical and power exports to the EU might be less than at first feared by exporters in Russia and Ukraine.

A new report from Sandbag and E3G, two pro-green think-tanks, warned that the CBAM could be just a “storm in a tea-cup”, as the new scheme would be applied to only 3.2% of total EU imports, and would replace only 47% of the free emission allowances currently given to industry.

But the overall impact is likely to be small, as the current proposal only covers a small share of exports to the EU, and importers will recover most of the additional costs through higher prices in EU markets.

For Ukraine, the total CBAM fees will reach €870mn in 2036, with iron and steel accounting for the vast majority with €780mn and fertiliser only about €50mn.

Turkey faces total CBAM costs of €824mn by 2036, again dominated by iron and steel, with fertiliser even less at about €40mn.

However, a key point of the report is that rising prices for these products will reduce the net cost of the CBAM to way below the current fee estimates. Hence the net cost would virtually halve to €602mn in 2036 for Russia, €410mn for Ukraine and €274mn for Turkey.

Thus the new cost to EU and foreign industries will likely be passed on to the direct consumers of the products covered in the CBAM, so that part of the cost will be recovered by importers in the form of higher selling prices for their products. The overall net effect on importers is likely to be very small, the report concluded.

Therefore the initial fears of polluting industries in Russia, Turkey and Ukraine could turn out to be partially misplaced, especially if they invest over the next 15 years in less-energy intensive technology.