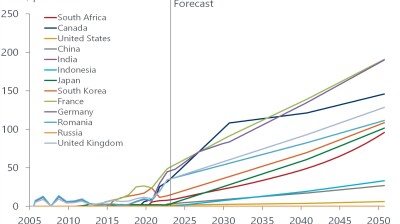 The effective carbon prices of China and the US – the two biggest polluters – will barely break $30/tCO2e in 2050. / Arup, Oxford Economics
By by Roberta Harrington in London January 11, 2023

New green industries could be worth $10.3 trillion to the global economy by 2050, equivalent to 5.2% of global GDP that year, finds a new report by Arup and Oxford Economics.

The green transition is often seen as a cost, but the report demonstrates the substantial benefits and the need to move quickly to capture them.

“Transitioning to a green economy is an inevitable end game for all countries, and many have already started their journey,” notes the report.

The report highlights ways innovation and strategic policymaking can address existential issues for the planet in a way that also builds broad prosperity and social well-being. Climate change is clearly an existential issue, with even a 1.5-degree Celsius rise in average temperatures seen as leading to devastation.

"As economists, we have to be honest about the fact that mitigating climate change will be expensive," said Oxford Economics' chief executive, Adrian Cooper. "But the transition to a carbon-neutral global economy also presents compelling opportunities."

New green industries – carbon-neutral goods, such as renewable-energy facilities, as well as services – are an essential part of reaching the Paris Agreement net-zero target.

Indeed, former Bank of England governor Mark Carney has said that a net-zero emissions future will allow banks, fund managers and insurers to invest in private sector plans – and profit from the “greatest commercial opportunity of our time."

And a peer-reviewed study using probabilistic cost forecasts by University of Oxford researchers, published in 2022, found that transitioning to a decarbonised energy system by mid-century could actually save the world at least $12 trillion, compared with a scenario in which current levels of fossil fuel use continue, says the study.

A decarbonised energy sector would not only result in lower energy system costs than a fossil fuel system – by ramping up solar, wind, batteries, electric vehicles (EVs) and clean fuels such as green hydrogen – but it would also provide more energy to the global economy and expand energy access to more people internationally.

“There is a pervasive misconception that switching to clean, green energy will be painful, costly and mean sacrifices for us all – but that’s just wrong,” said Professor Doyne Farmer, the mathematics professor who led the research at the Institute for New Economic Thinking at the Oxford Martin School.

Oxford Economics even found that a failure to act could dent global GDP by some 5% by mid-century. In 2021, the researchers estimated that the cost of weather-related interruptions to economic activity had already reached $233bn.

"This report shows the green transition is not a burden on the global economy, but a substantial opportunity to bring about a greater and more inclusive prosperity," said Arup’s global strategy skills leader, Bryce Richard.

Meanwhile, a second report by Arup and Oxford Economics issued the same day on carbon prices found that they must rise higher as climate ambitions rise.

While carbon prices historically have been low and limited, this should change with rising climate ambitions, say the researchers. Countries with established carbon markets and ambitious climate agendas will take the lead, they continued.

Norway is expected to have the highest effective price among European nations, reaching $212/tonne of carbon dioxide equivalent (tCO2e) in 2030. Elsewhere, Canada is estimated to have an effective price of $93/tCO2e by 2030. Meanwhile, the effective carbon prices of China and the US – the two biggest polluters – will barely break $30/tCO2e in 2050.

In the absence of stated policies, other economies like India and Saudi Arabia are not expected to price carbon anytime soon. For these countries, technical, administrative and political barriers remain, said the researchers.

Carbon prices should not have a notable impact on inflation and competitiveness, said the authors. The literature on the impact of carbon prices is mixed, with inflation from higher prices potentially mitigated by policy design and targeted fiscal spending. Furthermore, pricing carbon provides an incentive to switch to low-carbon energy sources, which should reduce the price impact over time.

Carbon prices will be necessary to reduce carbon emissions, they state. A carbon price sets a signal to market players to either reduce their emissions or pay to pollute. This then allows the market to internalise the costs carbon imposes on the environment – such as air pollution and extreme weather events – shifting the burden of responsibility and increasing accountability for large emitters.

Decarbonisation at scale and pace will not happen without a high enough carbon price. Current carbon prices are too low and limited in scope.

Finland introduced the first tax on carbon in 1990, followed by a few European countries such as Poland, Norway and Sweden. The EU emissions trading scheme (ETS) was not introduced until 2005, and it was followed by other developing countries like New Zealand, Australia and Japan. Initiatives from emerging markets did not start until the early 2010s, and Africa just had its first carbon tax introduced in 2019 in South Africa.

Despite their introduction decades ago, prices have been too low. For example, carbon in the EU ETS was priced below €20/tCO2e ($21/tCO2e) between 2009 to 2018. To put this in perspective, the Report of the High-Level Commission on Carbon Prices wrote that the carbon price needs to be within the $50-$100/tCO2e range by 2030 for warming to stay below 2 degrees Celsius.

bneGREEN: Most growth in power generation by 2050 will be solar and wind – BP
Climate-related crises among main drivers of human trafficking, UN drugs and crime office says
bneGREEN: Renewable energy was a hot topic in Davos but for Europe, much work remains

Most growth in global power generation by 2050 will be solar and wind, according to oil supermajor BP’s annual benchmark report, the 2023 Energy Outlook.

bneGREEN: Most growth in power generation by 2050 will be solar and wind – BP
4 days ago
bneGREEN: Renewable energy was a hot topic in Davos but for Europe, much work remains
11 days ago
bneGREEN: Floods turn Drina river in Bosnia into floating landfill
13 days ago
Central Asia’s shorter winters are whittling away glaciers
19 days ago
bneGREEN: River of waste clogs Serbia’s Lake Potpec after heavy rains
20 days ago