bneGREEN: Paris Accords targets will be missed, World on course to see 2.7C-3.1C increases in temperature by 2100 without drastic reductions 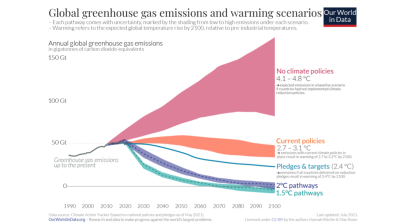 The global community will miss the Paris Accord target of keeping temperature rises to 1.5C and will see them rise to between 2.7C and 3.1C by 2100 unless emissions are cut by 15% a year from now on, according to research published by Our World in Data.

The non-profit statistics database published a set of predictions produced by Hannah Ritchie and Max Roser entitled "CO2 and Greenhouse Gas Emissions” that detailed various scenarios reproduced below. The results make for scary reading. With the COP26 global summit on climate change over governments have not committed themselves to the kind of drastic changes needed to prevent a climate disaster.

Our World in Data sketched out five possible scenarios based on data from Climate Action Tracker:

No climate policies: projected future emissions if no climate policies were implemented; this would result in an estimated 4.1 to 4.8°C warming by 2100 (relative to pre-industrial temperatures);

National pledges: if all countries achieve their current targets/pledges set within the Paris climate agreement, it’s estimated average warming by 2100 will be 2.5 to 2.8°C. This will go well beyond the overall target of the Paris Agreement to keep warming “well below 2°C”.

2°C consistent: there are a range of emissions pathways that would be compatible with limiting average warming to 2°C by 2100. This would require a significant increase in ambition of the current pledges within the Paris Agreement.

1.5°C consistent: there are a range of emissions pathways that would be compatible with limiting average warming to 1.5°C by 2100. However, all would require a very urgent and rapid reduction in global greenhouse gas (GHG) emissions. 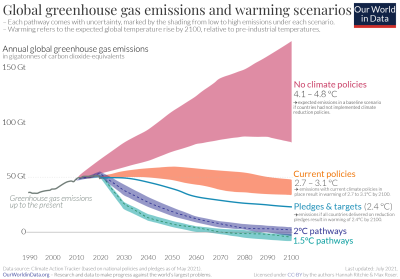 The UN issued a stark warning in August that human influence is unequivocally responsible for creating climate change, and that without immediate, rapid and large-scale reductions in carbon dioxide and other greenhouse emissions it will not be possible to limit global warming to 1.5°C this century.

Scientists at the UN International Panel on Climate Change (UN IPCC) said in their latest report that the rapid changes in the atmosphere, ocean and biosphere that had occurred were unprecedented over a period of many thousands of years, and that the world was now seeing the results of human-induced climate change.

The efforts to limit global warming have been too little, too late. However, the message seems to not have registered as the COP26 summit has failed to produce enough in the way of actionable commitments.

The UN repeated its warning in October saying the pledges are not strong enough and are not backed by meaningful promises of action.

Indeed, the latest climate promises would put the world on track for a temperature rise this century of at least 2.7°C, way beyond the 2°C and 1.5°C targets set out in the Paris Agreement, results echoed by the Our World in Data report.

During the COP26 summit the US joined the High Ambition Coalition and signed up to the goal of limiting global warming to 1.5°C by 2100, halving global emissions by 2030 and making good on the promise of $100bn per year of climate finance for poor nations.

But actually reaching that goal remains uncertain as Russia and China – two of the biggest GHG emitters in the world, have not signed up to any of the major agreements. China has chosen to support some initiatives while not getting involved in others. Russia has stayed out of the international meeting, preferring to go its own way.

Initially slow to respond to the impending catastrophe, Russia has upped its game this year and started to take the problem serious. Temperatures in Russia are rising three times faster than in the rest of the world, according to the most recent study, and Russia’s permafrost is melting, which threatens to do as much as a trillion dollars of damage to urban settlements and energy infrastructure in the frozen hinterland.

Russia's Prime Minister Mikhail Mishustin announced the signing of the 2050 Low Carbon Strategy, previously drafted by the Ministry of Economic Development on November 2 and taking an "intensive" trajectory that implies carbon neutrality by 2060.

As followed by bne IntelliNews, in October the ministry adopted a revised GHG reduction strategy, setting the carbon neutrality deadline at 2060 and choosing an "intensive" scenario as the main proposed policy guideline.

What would it take to limit global average temperature rise to 1.5°C?

Our World in Data cited work by Robbie Andrew, a senior researcher at the Center for International Climate Research (CICERO), who mapped out the global emissions reduction scenarios necessary to limit global average warming to 1.5°C.

Andrew’s ‘mitigation curves’ are based on the carbon budget outlined in the IPCC’s Special Report on 1.5°C and the methodology for converting a cumulative carbon budget into annual quotas from Michael Raupach, publish in Nature Climate Change. These mitigation curves are based on the assumption of zero negative emissions (actively removing CO2 from the atmosphere), the report said.

“The visualisation here shows the range of mitigation curves necessary to have a >66% chance of limiting warming to 1.5°C. We first see global emissions to date – sourced from the Global Carbon Project – shown in black. Then, shown are the range of mitigation curves which would be necessary if mitigation (here meaning a near-immediate peak in global emissions then reduction) started in any given year. For example, the curve ‘Start in 2005’ shows the necessary emissions curve if mitigation had started in 2005,” Our World in Data reported. “What becomes clear is that the later the peak in emissions, the steeper the curve: the longer we wait, the more rapid emissions reductions need to be.”

If emissions had peaked around 2000, for example, global emissions would have had to fall at an average of around 3% per year. As of 2019, only around 340Gt CO2 can be emitted before the 1.5°C budget is exceeded, equivalent to around eight years of current emissions.

If peak emissions were reached to today, emissions would have to be reduced by around 15% each year until 2040 to limit warming to 1.5°C without negative emissions technologies, Our World in Data concluded. 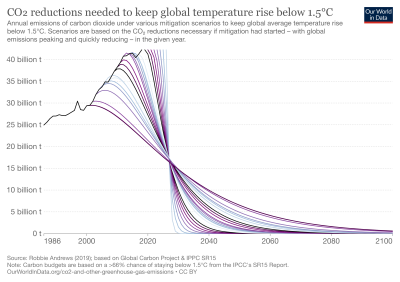 What would be needed to stay below 2°C?

Relaxing the conditions a little and aiming to keep temperature rises to only 2C makes life a little easier, but the challenge remains formidable.

Andrew also mapped out the mitigation curves for a 2°C target. In the visualisation we see the various emissions scenarios to achieve 2°C depending on the year that global emissions peak. The same principle applies: the later peak global emissions come, the more drastic reductions will need to be.

“As explained by Zeke Hausfather in the Carbon Brief, if we’d started global mitigation in 2000, the required rate of reduction would have been around 1 to 2% per year. If we peaked emissions in 2019 it would require reductions of 4 to 5% every year to limit warming to 2°C without negative emissions technologies,” the NGO reported. 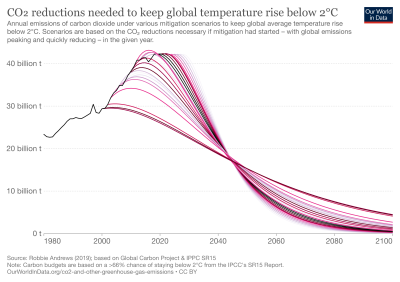 Although Russia has not been very co-operative with the international communities effort to co-ordinate action, the bottom line is each country will be responsible for meeting the challenge in its own territory.  In recent months, the Ministry of Economic Development rolled out its third and even more ambitious version of its decarbonisation strategy, which now aims for carbon neutrality by 2060.

The plan is based on the following pillars. 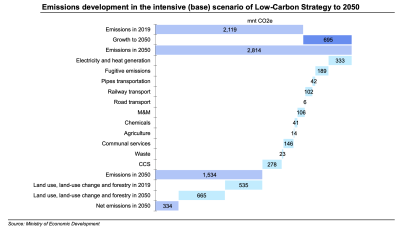 Limiting global warming to 1.5 °C could cost reduce global GDP by 2%, or $75 trillion, by 2050 as spending must increase to accelerate the energy transition.