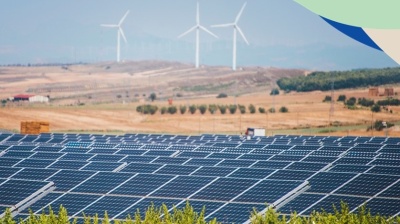 The increased targets aim to wean Europe off Russian gas and to keep Europe on course for reaching net zero by 2050, but an extra €195bn will be needed between now and 2027, the Financial Times reported.

The Commission could also speed up its permitting process for new green projects and beef up the solar sector by making rooftop solar compulsory for all new building, according to a leaked draft, EURACTIV reported.

The target is just one to be adjusted upwards in a widely reported leak of the EU’s REpowerEU plans.

The draft said that one option was to increase the EU’s renewable energy target for 2030 consumption above the current proposed level of 40%. The target is currently 32%.

It also calls for twice as much solar capacity to be online by 2029, and for greater use of heat pumps, geothermal & solar thermal. It also calls for wind expansion to drastically accelerated.

There is also a call for hydrogen use to rise to 20mn tonnes of green hydrogen by 2030, including half of it being imported.

The draft states that the aim of speeding up the transition to renewable energy is to reduce emissions and to cut Europe’s dependency on energy imports, as well as to keep energy prices down.

In the European Parliament there is already strong support for increasing the renewables target to 45% by 2030, EURACTIV said.

These targets form a central part of the EU’s Fit for 55 strategy, a package of climate legislation tabled in July which calls for the union to reduce its emissions by 55% by 2030.

Fit for 55 is part of the EU’s Green Deal programme, which includes reducing energy demand and investing in more green infrastructure across the continent.

The push for renewables has also been inspired by the war in Ukraine, as increasing green energy is seen by the EU as crucial to the EU’s ability to meet its stated targets of reducing to zero imports of Russian gas and oil.

Other measures in the draft include increasing energy efficiency, exploring fuel substitution, boosting electrification and using more renewable hydrogen and biomethane, which could save up to 35bn cubic metres of natural gas by 2030.

Another €29bn of investment in Europe’s power grid would be needed, as would the development of more LNG import terminals and pipelines.

In March, EU Commission Vice-President Frans Timmermans commented that reducing Russian gas imports would be "hard, bloody hard. But it's possible if we're willing to go further and faster than we've done before."

The EU said in March that its REPowerEU programme aims to reduce European gas consumption by 155 bcm, equivalent to the total imports from Russia in 2021. This is more than the previous Fit for 55 proposals of 100 bcm. The 155 bcm target is also up for approval by the EU on May 18.

The war in Ukraine has interrupted grain exports from the country and could create a global food crisis as vulnerable wheat importing countries in Africa and the Middle East face shortages and rising prices.