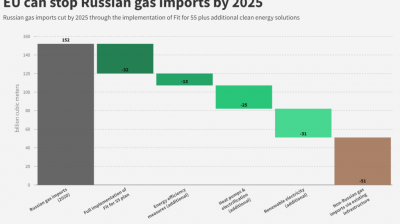 The EU can stop Russian gas imports by 2025 / Bellona
By Richard Lockhart in Edinburgh March 25, 2022

The EU stands a good chance of replacing 100% of its gas imports by 2025 without resorting to coal or new gas import infrastructure.

The EU will be able to replace 101bn cubic metres per year, or two-thirds, of Russian gas by 2025 by delivering the existing EU Fit for 55 package and by accelerating the deployment of renewable electricity, energy efficiency and electrification, think tanks Ember, E3G, Bellona and RAP said a briefing.

This follows initial statement from the EU that it would reduce EU demand for Russian gas by two thirds before the end of 2022. The new briefing described how it can call a total halt to gas imports by 2025.

However, there is no time to lose, and the think tanks warned that an urgent uplift in policy was now required to achieve the targets by 2025.

The briefing said that the remaining 51 bcm per year that Russian currently supplies can be replaced by gas sourced from existing assets, without the need for the construction of new LNG import or pipeline capacity.

The think tanks, following the lead of the IEA earlier in March, drafted a 10-point plan to end imports of Russian gas by 2025.

In terms of policy, the EU must implement fully and indeed fast-track its Fit for 55 Package, and drive forward the existing Renewables Directive, Energy Efficiency Directive, Emissions Trading System and the Energy Performance in Buildings Directive.

The EU must also hurry clarify its financial resources to support clean energy solutions and to begin injecting cash as soon as possible.

The briefing also calls for improvement in energy efficiency, and for an end to any legacy policies or subsidies that support gas consumption, such as support for new gas heating systems at home or subsidies for new gas infrastructure industry.

Revenues from subsidies or from carbon taxes or windfall profit taxes should also be ring-fenced for renewables projects.

The briefing also urged the creation of a European Commission task force to root out bottlenecks in supply chains and to streamline efforts across the EU.