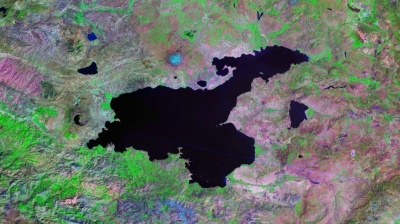 The shoreline of Turkey's largest lake, Lake Van, is said to have begun a steady retreat.
By bne IntelIiNews September 14, 2021

The consequences of drought and climate change in Turkey appear to have become so severe that by now hardly a day goes by without a report in the country’s press about the drying up of a substantial lake or river.

Hurriyet Daily News, for instance, last week reported on how Lake Aksehir in the southwestern province of Konya, once Turkey’s fifth largest lake, has almost dried up, while on September 14, the newspaper published a report on how Lake Uluabat in the northwestern province of Bursa is about to become a “dead pond”. Apart from the impact of climate change, the former is said to be suffering from the misuse of its waters for agricultural purposes, while the latter is reportedly heavily polluted with manure and industrial and household wastes.

“If we do not change our current water use system, we need to think that this lake is saying goodbye to us from now on,” said Tahir Nalbantcilar, an academic from Konya Technical University, in remarks on the fate of Lake Aksehir reported by Demiroren News Agency.

Konya is a province also threatened by hundreds of sinkholes, a phenomenon attributed to depleted underground water. llegal irrigation has, meanwhile, been blamed for the drying up of other lakes in the Konya Plain, known as Turkey’s breadbasket. This year has seen Turkey increasingly stepping up the import of wheat and animal feed amid its prolonged drought.

On September 12, Daily Sabah reported on how Turkey’s longest river, the Kizilirmak, was threatened by drought. The publication said parts of the river had dried up in the central province of Sivas, where its source is located. “Once roaring waters of the river now merely amount to small streams,” wrote Daily Sabah.

Turkey’s largest lake, Lake Van, also appears to be in danger. Hurriyet Daily News on September 10 reported on how the shoreline of the lake, located in the eastern region of Anatolia near the border with Iran, “has begun a steady retreat and replenishing precipitation seems to no longer maintain the basin’s water levels”.

In another worrying development, lack of rainfall earlier this year left the dam reservoirs that supply Istanbul with water dangerously low.

The consequences of the drought and climate change in Eurasia are of course not confined to Turkey. In mid-August, for instance, bne IntelliNews told how Kazakhstan looked set to lose a quarter of its anticipated grain crop this year, while in July water stress protests broke out in Iran’s southwest.

Across Central Asia, drought has caused mass livestock die-offs and irrigation water shortages. Studies point to shifts in precipitation patterns in the Tian Shan mountains that supply the region with much of its freshwater for irrigation and pasture.

Iranians cheered by collapse of lira flood over Turkish border for Black Friday shopping
ISTANBUL BLOG: Turkey on the edge
LONG READ: Russia looks poised to invade Ukraine, but what would an invasion actually look like?