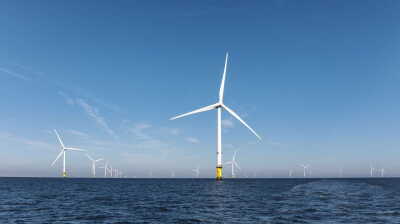 New offshore wind additions in Europe are forecast to bread the 4-GW barrier for the first time in 2020, more than double the additions seen in 2021.

New offshore winds projects will hit 4.2 GW in 2022, beating the previous record of 2.8 GW in 2019 and over double the pandemic-affected total of 1.9 GW in 2020, according to research from Rystad Energy.

Crucially, Europe is set to add more offshore capacity than China in 2022, the first time ever this will have happened.

Growth is forecast to continue, almost doubling again in 2023 to 7.3 GW and jumping to 8.6 GW in 2025. There will then be an expected slowdown in 2024 because of project timing, but records are anticipated to be broken again in 2025.

Yet despite the growth, it may not be enough to meet net-zero targets by 2050.

Europe is building only half the wind energy needed to achieve its energy and climate targets in the EU’s Green Deal, WindEurope said in its Annual Statistics 2021 report in February.

But the EU needs 30 GW a year of new wind to be installed to meet its 2030 renewables target of 40%. Of this, three quarters of the new installations over 2022-26 will still be onshore wind.

The UK will the main driver of record-high capacity additions, adding 3.2 GW of capacity in 2022, beating the previous record of 2.1 GW set in 2018.

Three large offshore projects at Hornsea Two, Moray East and Triton Knoll are slated to be fully commissioned in 2022 and those will be the three most significant projects in Europe in 2022.

“Europe is the world’s most mature offshore wind region, but Chinese installations have dominated global additions in recent years. Chinese projects represented 85% of all global capacity additions in 2021, with Europe only contributing 10%. But that looks set to change this year, and the continent is expected to continue ramping up capacity additions through the end of the decade,” says Rystad Energy offshore wind analyst Anubhav Venkatesh.

The main driver is growth is Orsted’s 1.4-GW Hornsea Two, the world’s largest, which will be the company’s only new addition to its portfolio in 2022.

The Moray East development – majority owned by Ocean Winds, a joint venture between Engie and EDP Renewables – will be the second-largest project globally when commissioned later this year.

Germany’s RWE is expected to be the second-largest contributor of wind capacity additions with its majority owned Triton Knoll in the UK and its wholly owned Kaskasi in Germany.

The 342-MW Kaskasi development will be Germany’s first offshore wind farm to come online since 2020, marking a slow restart to the country’s activity.

Behind the UK, France will be the second-largest contributor to capacity additions in Europe, with the country commissioning its first commercial offshore wind project at 480 MW.

Norway is also anticipated to contribute with the commissioning of the 88-MW Hywind Tampen floating project, which will be the largest floating offshore wind installation of its kind globally.

Italy will commission its first offshore wind farm, the 30-MW Taranto project, while Spain is likely to contribute capacity additions with its floating demonstration projects.

Capacity additions up to 2025 in Europe are set to be mainly led by the UK, but Germany is returning to offshore wind activity, while France continues to boost capacity deployment and is should add around 3 GW of capacity between 2022 and 2025.

The Netherlands and Denmark are not anticipated to bring any new offshore wind projects online in 2022.

Dutch capacity additions will resume in 2023, while Danish projects will add around 1.5 GW of capacity between 2023 and 2025.

Poland is expected to commission its first offshore wind farm in 2025, contributing 1.4 GW.

Turkish president says objections to Sweden and Finland joining Nato were all about terrorists and militants. Analysis still suggests a bigger issue in play is the autocrat’s determination to get his hands on warplanes.

Europe’s electricity system could become greener, more secure and more resilient while not requiring any funding if the right investments are made to replace increasingly expensive fossil fuels.

An 8% rise in global energy investment in 2022 to $2.4 trillion, driven by a 12% rise in clean energy spending, is still far from enough to tackle the energy crisis and to put the world on the path to a greener and more secure energy future.