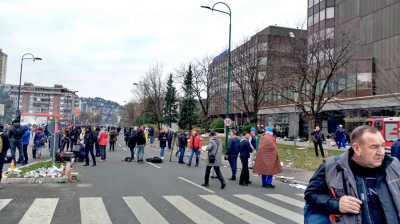 The miners ended the protest in front of the Government building
By Eldar Dizdarevic in Sarajevo November 25, 2021

Miners from seven mines in the Bosnian Federation, who protested in Sarajevo for two days, ended their protest on November 24 and went home, but also stopped digging ore in the mines until further notice.

Due to the protest by the miners supplying the Tuzla Thermal Power Plant, there has been no coal at the plant for two days, which has endangered its normal functioning, and the threat of the production of electricity stopping is becoming a realistic option.

Coal dominates the energy mix in Bosnia, though it does produce some electricity from hydropower and has started investing in renewables.

Elektroprivreda BiH Sarajevo, the main company of the concern Elektroprivreda BiH, which operates seven mines, announced that due to the protests and the suspension of coal deliveries, electricity reductions are possible across the Federation.

“Due to the difficult situation at the Tuzla Thermal Power Plant, all three blocks of the Kakanj Thermal Power Plant are in operation. The stocks of coal in the depots are sufficient for the operation of the power plant in the next 15 days,” announced Elektroprivreda.

At the protest in central Sarajevo, the miners were addressed by the president of the Bosnian Federation Miners' Union, Sinan Husic, who said that they were waiting for answers from the Federation’s government to all the requests submitted by the miners on November 18.

“We have not received an answer and our demands have not been met. But there is also no coal production in the mines of the Bosnian Federation. We will not start production until they meet all our requirements,” said Husic.

Although they received an invitation to talk to the government twice, the miners refused to negotiate their demands, saying that they wanted everything they were asking for and that they did not want anything below that.

Miners demand a minimum wage in mining of BAM1,000 (€511.29), the the dismissal of the general director of Elekroprivreda BiH Sarajevo, the abolition of the Decision on the Rulebook on reducing their salary from BAM850 to BAM570, as well as dismissal of coal directors who started applying the regulation.

Dubioza Kolektiv, one of the most popular rock bands in Bosnia and Herzegovina, joined the miners' protests in Sarajevo. Together with the miners, they sang a song to Fadil Novalic, the prime minister of the Bosnian Federation,  which included the lyrics: "Fadil, f*** yourself and you and the Government of the Federation, while the miners are working, your government is stealing.”

The situation at Elektroprivreda BiH is very complicated. Elektroprivreda BiH accuses the miners of not delivering quality coal and being paid for coal that was not delivered at all, while the miners point out that the problem is the excessive number of employees in mines that do not dig ore, and are politically employed in mines’ administrative offices. They note, for example, that one of the mines in the Bosnian Federation has as many as six journalists allegedly employed in its press centre.

Almost 50% of young Bosnians want to leave the country