Bosnia, Serbia warn of countermeasures against Kosovo if tariffs not removed by July 1 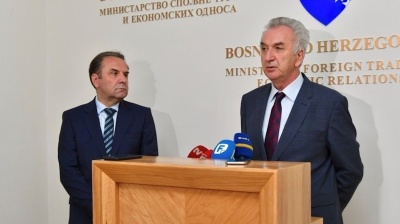 Bosnia & Herzegovina and Serbia are considering taking countermeasures against Kosovo if Pristina refuses to revoke its 100% import tariffs by July 1, the government in Belgrade said in a statement on May 27.

Kosovo introduced 100% tariffs on goods from Serbia and Bosnia & Herzegovina in November 2018, after Belgrade thwarted Pristina’s bid to join Interpol. Kosovo declared independence in 2008 and is still not recognised by Serbia or Bosnia (by Bosnia as a result of the veto imposed by one of the two entities, the Bosnian Serb-dominated Republika Srpska) as an independent country.

Each of the two countries has suffered from the import tariffs. Serbia’s exports to Kosovo sank 80% from November 21 to May 21 this year, which is €189mn lower y/y.

This means damage of slightly higher than €1mn a day, Serbia’s Minister of Trade, Tourism and Telecommunications Rasim Ljajic said on May 27.

Bosnia’s exports in the last six months sank even more, by 97%, which was equal to damage worth €27mn. As a result of the tariffs Bosnian companies sold just €500,000 worth of goods in Kosovo during the six-month period.

Ljajic and Bosnia’s Minister of Foreign Trade and Economic Relations Mirko Sarovic agreed at a meeting on May 27 that because of the damage caused to companies in both countries “the two countries should jointly perform and carry out coordinated activities, aimed at increasing the pressure to abolish the tax”.

“If the fees are not removed by the summit of Western Balkans leaders in Paris on July 1, the two countries will consider the introduction of various models of countermeasures, realising that this is not the best option, but is certainly a measure we have been forced into,” the statement reads.

Earlier in May, the GAP Institute for Advanced Studies, a Pristina-based think tank, said that Kosovo failed to benefit from the imposition of the tariffs, as — despite optimistic forecasts from the authorities — there was no corresponding increase in local production.

On the other hand, the biggest beneficiaries during this period were Slovenia, Israel and Turkey, whose exports to Kosovo increased significantly.

Tensions between Bosnia, Montenegro and Serbia rise over closed borders