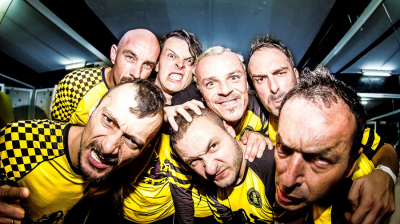 Students from Sarajevo University’s electrical engineering school agreed to build Robby after the band requested a robot designed to fit the concept of their album #fakenews, which was released last year, reported New York Post.

In a video clip for the #fakenews album, one band member thinks it would be fun to have a robot do his work while he relaxes and has fun, so he orders one and assembles it.

Gradually the whole band is replaced by robots in the clip, allowing the men to go and party. But they then get locked out of their studio and the robots have the last laugh, inviting young women to dance and drink as the men look on from outside.

“Every little thing is under machine control,” Robby sings in a song called “Take my job away”.

Dubioza kolektiv is a Bosnian avant-garde dub rock group known for their crossover style that incorporates elements of hip hop, dub, ska, reggae, rock, punk, electronic music and Balkan music, and for their socially and politically conscious songwriting with lyrics in multiple languages.

In 2015, Dubioza was referred to as the most popular Bosnian musical band. The band is a very popular group elsewhere in the former Yugoslavia as well.

Dubioza was formed in 2003 and it originates from Sarajevo and Zenica. It has released ten studio albums and one live album.