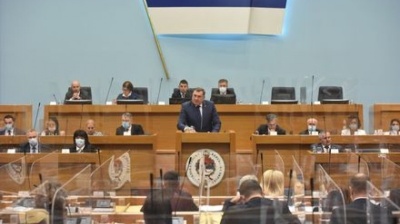 The National Assembly of Republika Srpska, the smaller entity in Bosnia & Herzegovina, adopted a non-binding decision to withdraw from the armed forces, the judiciary and the state's tax system on December 9.

Representatives of the Republika Srpska opposition did not attend the session where the MPs present voted favour of the decision, which left a six-month period to draft entity laws on the armed forces, the judiciary and the tax system.

Milorad Dodik, president of the ruling SNSD party and a member of Bosnia's three-member presidency, said that parliamentary proposals would be concretised in the coming period. “After that, we will form institutions at the entity level. These will be concrete steps after today's debate in the RS National Assembly,” Dodik said.

However, opposition leaders say the moves could lead Republika Srpska into a new war. “I think the path you have chosen is dangerous for RS and we cannot follow you,” said Mirko Sarovic, leader of the largest opposition party SDS.

In a joint statement, the embassies of the United States, the United Kingdom, France, Germany, Italy and the European Union delegation said the parliament's decision was a “further escalation step”.

"Members of the governing coalition and the RS must be aware that continuing this dead end path of challenging the Dayton framework is damaging the economic prospects of the entity, threatening the stability of the country and the entire region and jeopardising BiH's future with the EU,” the western embassies said.

The embassies and the EU Delegation added that increased tensions and the blocking of the functionality of the institutions will restrict economic opportunities available to citizens, deter investment, and distract from the fight against corruption.

“RS politicians and those in the [Bosnian Federation] have opportunities to resume dialogue and to urgently find a resolution. We encourage all leaders to build mutual trust by immediately abandoning divisive and escalator rhetoric and return to the state institutions in full capacity, where they can also talk about disagreement issues,” said the statement from the top five western powers and the EU special representative in Bosnia.

“The decisions of the RS National Assembly, voted by a political group gathered around Milorad Dodik, are a direct blow to the Dayton Peace Agreement and the constitutional order of Bosnia & Herzegovina,” said Bakir Izetbegovic, leader of the largest Bosniak party, the SDA.

According to Izetbegovic, Bosnia’s judicial institutions are obliged to react decisively and take urgent steps within their competence. High representative Christian Schmidt has the same obligation, as do the guarantor countries of the Dayton Peace Agreement.

Izetbegovic added that he was disappointed with the “lukewarm reactions” of the international community in Bosnia to the Republika Srpska National Assembly's decision “calling on all leaders to dialogue”, “avoiding inflammatory rhetoric and building trust”.

Serbian President Aleksandar Vucic said Serbia is one of the signatories and guarantors of the Dayton Accords. Asked by journalists about the vote, he added that Serbia does not interfere in the internal affairs of other countries and that he does not want to talk about it, but that he can say what Serbia's policy is.

Russia may leave the WTO and WHO. In practice, it never really joined

Russia's parliament will consider leaving the World Trade Organisation, World Health Organisation and other international organisations which it feels have "neglected their obligations towards Russia".

12-day fact-finding tour finds nation left exposed to “scarcity of resources to guarantee the basic needs of those most in need”.

Kyrgyzstan: Eccentric health minister fights for his job amid claims of corruption and bullying
13 hours ago
Azov commanders have remained behind in the Mariupol steelworks to continue the fight
14 hours ago
Russia hopes Chinese carmakers will help revive Moskvitch brand
14 hours ago
Russia may leave the WTO and WHO. In practice, it never really joined
14 hours ago
UN special rapporteur issues damning indictment on human cost of sanctions in Iran
19 hours ago