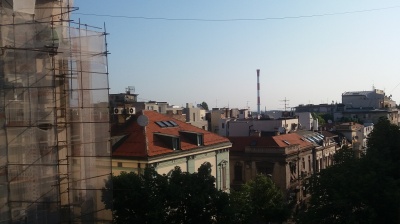 Residential markets across Southeast Europe have recovered strongly since the start of the coronavirus (COVID-19) pandemic, though prices remain the lowest in Europe, a report from Deloitte shows.

Most markets in the region experienced a dramatic slowdown in activity during the initial spring lockdowns, but this was followed by a rebound in transactions later in the year, and, in many cases, fresh interest in houses and properties away from major cities.

“Overall, 2020 proved to be a year of growth in terms of transaction prices of new dwellings as national averages increased in 21 countries out of 24 observed,” said the report, Property Index: Overview of European Residential Markets 10th edition, July 2021.

At the other extreme, the average transaction price for a new dwelling was just €578 per square metre in Bulgaria and €881 per sqm in Bosnia & Herzegovina, despite the revival of both markets from the summer of 2020.

Seven other countries from the eastern part of Europe – Slovakia, Latvia, Croatia, Hungary, Poland, Serbia and Romania – also recorded average prices of between €1,000 and €2,000 per sqm in 2020, along with Ireland and Portugal, putting them at the cheaper end of the market. The highest price growth in 2020 was recorded in Hungary, at 12.3%.

Paris was also the most expensive market for rental properties at €28.6 per sqm per month, followed by London and Oslo. The lowest average monthly rent was in two Bulgarian Black Sea cities, Burgas at just €2.9 per sqm and Varna (€3.5 per sqm). Rental rates were also low in three other Southeast European countries: Bosnia, Croatia and Serbia.

“[A]ny negative impacts the pandemic might have on residential markets are considered to be mostly short-term,” said the report, Property Index: Overview of European Residential Markets 10th edition, July 2021. It also noted the higher level of savings during the year that are now being channelled into real estate purchases. “During the spring wave of pandemic in March and April 2020, almost all non-essential workers have stayed at home. This resulted in limited spending for specific types of goods and services and subsequently led to a higher volume of savings. In some countries, during lock-downs, citizens were able to save even 20% more of their income than during ordinary months.”

Commenting on longer-term trends, the report added: “because of problems connected to pandemic, we … observe a push to modernise many European economies with the ultimate aim of long-term sustainability by making them more digitalised and green, which will inevitably change the way we perceive many aspects of residential real estate markets.”

Romania’s real estate has been growing fast, and in 2020 the number of dwellings delivered reached a new record, while the number of transactions increased compared to 2019, the report said.

This followed an initial hiatus in the residential market that was followed by a rebound in real estate transactions in the second half of the year.

“The middle market segment of the residential market was more developed in 2020 due to the desire of buyers to live in larger spaces in context of work from home, increased disposable household income and low interest rates, which made housing more affordable,” said the report.

Meanwhile, lower supply and higher demand within the rental segment kept up pressure on rental prices; in Romania’s six largest cities, rental prices were 30% higher than in 2019 last year.

Romania also had the highest number of initiated properties across the Central and Southeast Europe region last year, and the second-highest in Europe after Austria. In Romania there were 7.5 initiated dwellings per 1,000 citizens in 2020. 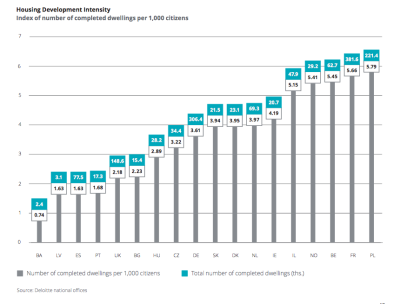 Developments in Bosnia, which had seen small but steady growth rates in the residential market in 2018 and 2019, broadly reflected those in international markets. “At the start of the pandemic, residential property transactions fell significantly due to the introduced uncertainty. Transaction volumes then spiked and quickly normalised as the markets mirrored the world and adapted to the new conditions, overall remaining in line with expected numbers in the last quarter of 2020,” the report said. The report noted a “spike in demand across the board of segments”, both the higher-end and the more affordable.

On the other hand, the rental sector was badly hit by the pandemic, as short-term visits to the country were halted and there was a fall in long-term rentals, for example for university students.

Bulgaria’s housing market slowed down significantly in 2020, after five years of steady price rises and strong demand supported by growing household incomes, record-low mortgage interest rates and low unemployment. However, after the spring lockdown, “activity was resumed immediately after the measures were eased in May 2020. Buyers were rushing to buy homes before a possible second wave in autumn occurs. This led to high market activity all through the summer and autumn months, compensating for the lower sales volume in the second quarter,” the report said.

As a result, Bulgaria’s residential market had a successful second half of 2020, with property prices continuing to grow. Demand shifted towards previously overlooked properties such as rural houses, as well as vacation apartments in the ski and beach resorts. “In our view, this was all driven by the need to have your own space for recreation, outdoor activities, and the possibility to work from anywhere,” Deloitte commented. 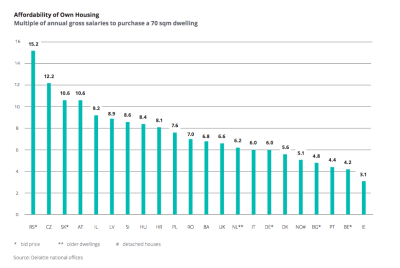 Serbia entered the pandemic after constant growth in the residential market since 2016. The market contracted sharply during the state of emergency in spring 2020. However, Deloitte noted a rise in the price of weekend and recreational houses in rural areas by 20% on average, as Serbians sought to escape the strict measures imposed in the cities. Post-lockdown, the real estate market “quickly bounced back in Q2 of 2020 and continued throughout to Q1 of 2021”, though the report added that buyers are still cautious and are expected to remain so until the situation stabilises permanently.

While Serbia saw only a small dip in GDP in 2020, neighbouring Croatia was one of the worst hit countries in the region by the pandemic, due to its large tourist sector. Despite this, residential property prices in Croatia continued to rise in 2020. The price per metre for new homes in the capital Zagreb rose by 7.38% during the year. Two serious earthquakes, in Zagreb in March and Petrinja in December, affected the market, contributing to the demand for new homes.

Activity in the real estate sector mainly halted in Slovenia in spring 2020, but after the state of epidemic was cancelled, the number of transactions quickly returned to previous levels, while sales of houses increased – rising by around 15% year on year in July-August 2020 – while apartment sales remained flat. This was the followed by a second decline in transactions in December 2020, though the fall was shallower for houses (20%) than for the overall market (35%).