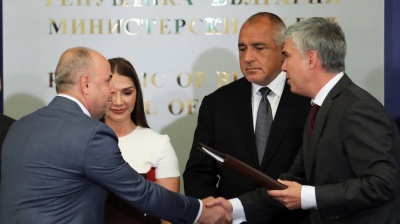 Bulgaria’s state-owned gas network operator Bulgartransgaz said on September 18 it has signed an agreement with a consortium comprising Saudi Arabia's Arkad Engineering and Construction Company and Italy-registered Arkad ABB for the construction of the Turkish Stream extension in the country.

The contract was inked few days after the Supreme Administrative Court ended a case launched based on objections to the selection of Arkad as winner in the tender. The closure of the case allowed the project to move forward.

According to the contract, Arkad will have to supply the necessary equipment and materials to carry out the investment project and to build the pipeline starting at Bulgaria’s border with Turkey and ending at the border with Serbia.

The contract’s value is €1.1bn and the project should be completed within 615 days. In the first 250 days, Arkat is obliged to build 308km of the pipeline, which will allow gas deliveries to Serbia and to Hungary, ending at the hub in Austria.

Bulgaria’s state-owned gas network operator Bulgartransgaz initially picked Arkad as the first-ranked bidder, but in May decided to replace it with GRRB, claiming that the winner had failed to provide the necessary documents to sign the contract in time.

In June, the competition watchdog ruled that the contract should be awarded to Arkad as Bulgartransgaz’s decision to replace it with GRRB broke the law and the contract must be signed with the winner of the tender.

Gazprom has determined the itinerary of the second line of the Turkish Stream pipeline will span Bulgaria and Serbia starting from 2020, then go through Hungary and Slovakia starting from 2021 and the second half of 2022, respectively. According to Bulgarian Energy Minister Temenuzhka Petkova, the country will spend €1.4bn ($1.59bn) to build the new gas link to Turkey to transport Russian gas from the Turkish Stream pipeline.

At the end of January, Bulgartransgaz announced it had successfully completed the third market test for Turkish Stream with the full capacity of the future pipeline being booked by companies, and will move forward with plans to join the project.