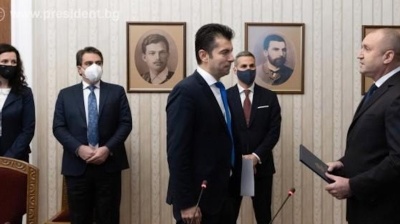 President Rumen Radev has over the mandate to form a government to Change Continues. / president.bg
By Denitsa Koseva in Sofia December 11, 2021

Change Continues, the winner of the November 14 snap general election, signed a widely-expected coalition agreement with the Bulgarian Socialist Party (BSP), There Are Such People (ITN) and Democratic Bulgaria on December 10, securing a comfortable majority in parliament.

Formation of the coalition and a regular government are expected to put an end to the deep political crisis in Bulgaria, which has gone through three general elections and two caretaker governments since April, as no party had been able to form a majority until now.

The agreement was signed the day after President Rumen Radev gave the formation the mandate to form a regular government and the two leaders of Change Continues – Kiril Petkov and Assen Vassilev – immediately returned it with a proposal for their cabinet.

Petkov, who is nominated to head the government, said the first priorities for his cabinet, which should be voted on by parliament on December 13, will be to deal with the coronavirus (COVID-19) pandemic, the high energy prices and changes to the state administration that would make it more efficient and put an end to the corruption.

The new government will have five deputy prime ministers – two nominated from Change Continues and the other three from its coalition partners. As expected, Vassilev will head the finance ministry and will become one of Petkov’s deputies. The two leaders are close friends and worked well in a team while serving as ministers in the first caretaker government under Stefan Yanev, which was appointed in mid-May. As Petkov’s deputy, Vassilev will supervise the economy, energy and EU funds.

Kalina Konstantinova is Petkov’s other deputy nominated from Change Continues. She will be in charge of effective governance. Konstantinova was a member of Petkov’s team when he was caretaker economy minister. She graduated from Bard college in New York where she studied economy. Konstantinova says she studied how to turn a poor state into a rich one.

Change Continues also nominates current caretaker Prime Minister Stefan Yanev to head the defence ministry. Two more members of the current government were also nominated by the formation to keep their posts – Boyko Rashkov of the interior ministry and Nikolay Denkov of the education.

Assena Serbezova was nominated by Change Continues to head the health ministry. Serbezova, the head of the Bulgarian Pharmaceutical Union, attracted attention at the start of the COVID-19 pandemic in 2020 when she said in an interview that there was risk of shortages of certain medications as people were rushing to pharmacies to stockpile, while imports were disrupted.

Following the interview, chief prosecutor Ivan Geshev ordered a probe against Serbezova. She was accused of attempting to provoke panic but was acquitted as her statements were based on evidence. However, Geshev’s move was seen as an attempt to silence the opposition and put pressure on people opposing the then government of Boyko Borissov.

Actor Atanas Atanasov of Change Continues will head the ministry of culture. Atanasov gained popularity back in 2016 after deciding to restore the community centre of a small village near Plovdiv by himself.

Businessman Nikolay Subev, who owns one of the largest delivery companies in Bulgaria, will become transport minister.

Daniel Lorer, also a former member of Petkov’s team at the economy ministry, will become innovations and growth minister. Lorer, who graduated in Tel Aviv, is an IT expert with a successful business. Since 2018, he has been one of the founders and managing partner of the BrightCap Ventures risk investments fund focused on IT companies.

The BSP agreed to the nomination of its leader Kornelia Ninova for deputy prime minister and economy and industry minister. The party will have three other ministers – of labour and social policy (Georgi Gyokov), agriculture (Ivan Ivanov) and tourism (Hristo Prodanov). Of these nominations, the name of Ivanov has raised controversy as he worked in the past for the SIK group, allegedly involved in racketeering and illegal business. However, Petkov said he was aware of Ivanov’s past and that he had only been an employee and was not involved in any illegal activity.

Democratic Bulgaria will be in charge of the environment with prominent environmentalist Borislav Sandov being nominated for deputy prime minister and environment and waters minister. Sandov is one of the leaders of the Green Movement party, which is a member of Democratic Bulgaria. The formation also made nominations for the minister of justice (Nadezhda Jordanova) and e-government (Bozhidar Bozhanov).

Petkov said after the signing of the coalition agreement that each minister will be allowed to pick his or her team and will be responsible for implementing the reforms and policies agreed in the 140-page document. Each of the parties is also allowed to pick advisors for the ministries where it does not have a minister, to secure mutual control.

When giving the mandate to Petkov and Vassilev, President Radev said the new coalition will have 100 days to make significant reforms to the judiciary in order to restore the rule of law. Petkov responded they do not intend to waste even a day.

"You started the change from the square, now it is time to complete the job," Petkov said.

He was referring to mass protests in 2020 where thousands of people demanded the resignations of Borissov and Geshev and were supported by Radev. Both Petkov and Vassilev, as well as many of the future ministers, were active participants in the protests without being political figures at the time.

While Petkov and Vassilev are optimistic that their government will be successful, former premier Borissov said he expects the new cabinet to bring the country to catastrophe. Borissov said as quoted by Mediapool that his party will not back a government where Rashkov is minister.

Rashkov, who has headed the interior ministry since mid-May, has been for years a fierce critic of Borissov and of Geshev and has said he will provide evidence of Borissov’s involvement in corruption.

The ethnic-Turk Movement for Rights and Freedoms (DPS) has not yet commented the future government, while the far-right Vazrazhdane party, which has also made it into the new parliament, said it will be a strong opposition to everyone.