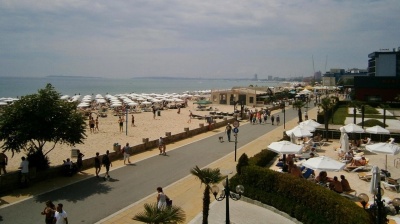 The Bulgarian government put Ukrainian refugees up at Black Sea hotels, but now wants them to move out for the summer tourist season.
By Denitsa Koseva in Sofia June 1, 2022

Bulgaria’s government has stopped a programme for the relocation of Ukrainian refugees, currently accommodated at hotels on the Black Sea coast, and will send them to refugee centres in Sofia and Elhovo, Deputy-Prime Minister Kalina Konstantinova said late on May 30.

Her statement comes a few days after a government programme for the relocation of refugees from the Black Sea to state-owned holiday bases within the country failed. Refugees said they had no information on where they would be sent until the last minute, so they were unwilling to move. The government says the locations were kept secret for security reasons.

After the start of the war, the Bulgarian government approved a financial programme to pay BGN40 (€20.5) per refugee per day to hotel owners for accommodation and food. This programme ended on May 31.

As of June 1, the state will pay hotels only BGN10 per refugee per day for accommodation and BGN15 if food is also provided, which hotel owners claim is insufficient.

With a rather irritated tone Konstantinova said that refugees have not provided timely information on whether they want to be relocated, or if they will find a place to stay on their own. For two days, buses, sent by the government to transport refugees, were travelling almost empty with only few hundred out of around 90,000 refugees agreeing to be relocated.

“To our great disappointment, in return we have received mass specific and personal wishes that categorically could not be satisfied. And here we are far from talking about vulnerable people - they are the ones with the least household requirements. That is why our efforts today are focused precisely on them," Konstantinova stated in a video message.

“Protection is a right, not an obligation. Therefore, I shall no longer allow any empty bus, not a single empty wagon to leave. The development of the situation from now on is in the hands of the Ukrainian community in Bulgaria. I am appealing to those of you who do not need shelter to declare it now. It's the only way we can take care of people in real need right away. For people in real need, we have both bases and food and teams waiting for them," Konstantinova added.

Her statement angered many Bulgarians who said it was shameful and the deputy prime minister must resign. According to many volunteers, refugees were confused as didn't have enough information on the government’s programme. In many cases, the state sent people who do not speak either Ukrainian or Russian to gather information from the refugees on the planned relocation.

“The state did only one proper thing since the start of this war – to take care of refugees, but they f*cked up everything now," Daniela, 45, who is helping refugees in Bulgaria, told bne IntelliNews.

However, Prime Minister Kiril Petkov defended Konstantinova and said, as quoted by Radio Free Europe, that it was time for the refugees to face reality and no longer receive luxury treatment. He added that the state cannot afford to pay for hotels any longer and will provide what it can to refugees.

“For three months, we have given unprecedented support in some of the best hotels of Bulgaria. Now we are entering in a slightly more normal framework, they are refugees after all. The Bulgarian state cannot indefinitely support such luxurious accommodation in Bulgaria. So we are entering reality, which is closer what is expected for refugees,” he added.