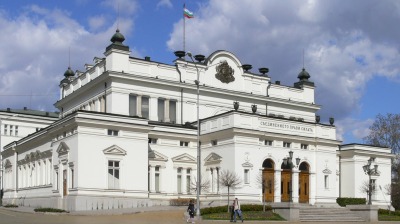 Seven parties have passed the 4% threshold and will enter Bulgaria’s new parliament, making the formation of a ruling coalition a virtually impossible task, final results from the central election committee, CIK, showed on October 3.

Gerb won the snap general election with 25.33% of the votes, followed by Change Continues with 20.2%. Neither party has an obvious route to putting together a majority to form a government.

Also represented in the parliament are the ethnic-Turk Movement for Rights and Freedoms (DPS) with 13.76%, far-right pro-Russian Vazrazhdane with 10.17%, the Bulgarian Socialist Party (BSP) with 9.3%. Reformist Democratic Bulgaria is sixth with 7.44% and nationalist pro-Russian Bulgarian Ascend got 4.62%.

Showman Slavi Trifonov’s There Are Such People (ITN), which put an end to the previous ruling coalition, did not pass the 4% threshold. ITN was briefly Bulgaria’s most popular party, but people were disappointed with its decision to bring down the reformist government led by Change Continues’ Kiril Petkov.

The turnout was below 40% — at 37.8% — and was the lowest in more than three decades, according to CIK spokesman Tsvetozar Tomov.

“Slightly more than 2.5mn people voted so I can definitely say that this is the parliamentary election with the lowest voting activity of all elections held since 1989,” he said at press conference on October 3.

The new parliament should hold its first session no later than one month after the CIK announces the official results, which is expected later this week.

Lawmakers will have to elect a parliament speaker, which usually shows whether a ruling majority already exists in parliament.

However, with the most fragmented parliament in decades it seems virtually impossible for politicians to form any ruling majority.

According to Capucine May, Europe Analyst at risk intelligence company Verisk Maplecroft, Bulgaria’s fourth general election held in less than two years will not be the last, with prospects for a new snap vote in early 2023 being highly likely.

Gerb has already indicated it wants to form a coalition with the DPS, Democratic Bulgaria and possibly Change Continues.

However, Change Continues said it will never enter in coalition with the DPS or Gerb. Democratic Bulgaria’s co-leader Hristo Ivanov said on October 3 that if his formation joins a Gerb-DPS coalition that would take people out on the streets. Moreover, Ivanov said Gerb has no plan on what to do next, nor a partner.

“They do not have a partner for one simple reason – they refuse to bear the responsibility for the corruption model of capturing the state, which did not start during Gerb’s rule. It has its roots in the communist regime but flourished during Gerb’s rule with the unofficial coalition with the DPS that is being offered to us now,” Ivanov said in an interview with bTV.

“They can now see their isolation … They do not have a plan, they do not have partners. Because anyone who attempts to return this unreformed Gerb, which has not said a word about the 12 years of corruption model of capturing the state, to power, would commit suicide,” Ivanov added.

He also said that he sees a possible coalition between Gerb, the DPS and Vazrazhdane.

This means that Gerb has only few options left – to attract the two small pro-Russian parties or the BSP, which is also pro-Russian. This scenario seems impossible as it would cost Gerb and the DPS voters. Moreover, the BSP’s leader Kornelia Ninova said on October 3 that her party would not join a Gerb-DPS coalition. Ninova also said that the BSP would not back a technocratic government either.

Change Continues co-leader Assen Vassilev said that if Gerb fails to form a government, his formation would try hard to find a solution within this parliament. However, even if it joins forces with Democratic Bulgaria and the BSP as in the previous parliament, that would not be enough for a ruling majority. That formula could only work with the unofficial support of Gerb and/or the DPS.

“These could be two parties with 50 MPs but backed by other parties with a coalition agreement, which do not participate in the executive power [the government] directly but support it in parliament. Anything is possible. You have to understand that there are many more options than what we see,” Yanev said in an interview with public broadcaster BNR.

He added that, if given a third mandate to form a government, his party would try to fulfil this idea.

“A potential for government can be found in any parliament when parties that are represented [there] realise that the Bulgarian people has sent them there to seek a solution and not to create additional problems,” Yanev said.

According to May, as a new early vote seems inevitable, President Rumen Radev will have the chance to appoint one more caretaker government that would most likely be rather pro-Russian.

“The president is inching toward the pro-Russian camp, which suggests an interim government would steer Bulgaria away from its pro-Western position,” May noted.

Furthermore, continued political uncertainty will shelve plans for anti-graft reforms that would bolster investment and avoid a recession.

“A fractured parliament will struggle to support households this winter, pushing up borrowing and piling pressure on the country’s banks,” May commented.

This would lead to double-digit inflation, lower economic growth and will take Bulgaria away from any chance to join the eurozone in 2024.